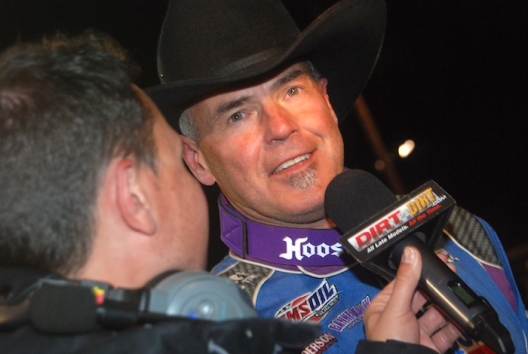 QUEEN CREEK, Ariz. — Like a gunslinger that refuses to ride off into the sunset, Billy Moyer finding it hard to let his impending retirement keep him away from Keyser Manufacturing Wild West Shootout.

After a couple of subpar outings in the opening two rounds at Arizona Speedway, the 59-year-old driver from Batesville, Ark., got back on track Wednesday to extend his all-time lead in winter Arizona victories since 2001.

The fourth-starting Moyer grabbed the lead from Rodney Sanders of Happy, Texas, on the ninth lap, fought off a mid-race challenge from Jimmy Mars of Menomonie, Wis., and then kept Chris Simpson of Oxford, Iowa, in check late for a 30-lap victory worth $5,000.

Pierce’s third-place run ended his hopes of the Keyser Quarter-Million Challenge, which would’ve paid $250,000 to any driver winning all six races. Pierce still has a shot at $100,000 (for five victories) or $50,000 (for four victories) from the title sponsor’s bonus program.

Moyer's victory is his 13th in Arizona — three more than Phillips — and his first ever at the third-mile Arizona Speedway, the track that's hosting the Late Model miniseries for the first time.

“We tried the top a couple of laps early in the race, and it was definitely better for me to cruise around that bottom,” Moyer said of his winning line that he stuck with despite a high-side challenge from Mars after a mid-race restart. “I had me a race going there (with Mars), so I kinda had to pick it up, and kind of forgot about trying to save the tires anymore.”

Simpson was second on the 14th lap but slipped back a spot before regaining the spot and pulling to within .870 seconds of Moyer at the checkers.

“After that restart, my right-rear (tire) just didn’t fire up the way I thought it should, and Mars got by us and kind of made a run at Moyer,” Simpson said. “(We) just kept plugging away on the bottom and the more laps I ran the better I felt down there.”

Mars has run the bottom groove most of the miniseries, but he gave the high side a shot mid-race, nearly pulling alongside Moyer before he slipped back to fourth at the finish.

“We’re good on the bottom, I just thought my only chance to win it was to going to be on the top, and I just burnt my right-rear (tire) off trying to get around Billy,” Mars said. “It’s all right. We’re doing all right. The bottom was getting a little bit more racy tonight, so that was good … we’ll just keep digging, that’s all we can do.”

The 30-lapper was slowed by a pair of cautions, the first one on the first lap when third-starting Dustin Strand spun after contact from Moyer, collecting Earl Pearson Jr. between turns one and two.  Strand was able to soldier on to a 10th-place finish while Pearson’s Moring Motorsports ride was towed off the track.

Another caution appeared on the 15th lap when Chad Mahder of Eau Claire, Wis., ended up facing the wrong way in nearly the same spot. He retired.

Miniseries drivers take their final day off Thursday before returning to action with a $5,000-to-win Late Model event on Friday. Saturday’s race also pays $5,000-to-win heading for the $12,000-to-win finale.

Notes: Moyer, a National Dirt Late Model Hall of Famer, notched his 861st career victory. … Brandon Overton of Evans, Ga., who entered the night third in miniseries points, was sidelined by engine woes early in his heat race and scratched for the night. He’s driving Ham Lake, Minn., driver Don Shaw’s car in Arizona. … Garrett Alberson of Las Cruces, N.M., rallied to win the B-main after an apparent electrical issue forced him out of his heat race. … Jason Krohn of Slayton, Minn., decided to scratched for the night after a subpar qualifying effort. … Clay Daly of Watsonville, Calif., had engine problems when he tried to get up to speed for qualifying and was pushed to the pits. The Pete Van Iderstine team was working to have a motor swapped in preparation for Friday’s action. … Ricky Thornton Jr., his Late Model weekend over after his car was damaged in a Sunday accident, won Wednesday’s modified feature.

Bobby Pierce of Oakwood, Ill., continues his quest for the Keyser Quarter-Million Bonus heading into Wednesday evening’s third round of the Keyser Manufacturing Wild West Shootout at Arizona Speedway.

The top five finishers in each of four heat races transfer to the 30-lap main event with the winners redrawing for the first two rows of the feature lineup. A consolation race will transfer four drivers to complete the 24-car field for the feature, which pays $5,000-to-win.

Wednesday's event is the third of six races over nine days at the third-mile oval southeast of Phoenix.

The Late Model car count ebbed a bit with drivers who had problems in Sunday’s action or Tuesday’s practice. … Home-track favorite Ricky Thornton Jr. of nearby Chandler is done for the week in the Late Model division after his J.R. Haley-owned ride suffered heavy damage early in Sunday’s feature. … Jake O’Neil of Tucson, Ariz., will sit out Wednesday while awaiting parts to repair an engine hurt in Tuesday’s practice. … No new Late Model drivers are on the grounds Wednesday, but Chandler Petty of Cabot, Ark., is expected to compete for Louisiana-based Childress Racing during three weekend events. … The 40-car Late Model count is the fewest for Arizona winter action since the 2013 finale at USA Raceway in Tucson, Ariz., drew 39 cars.