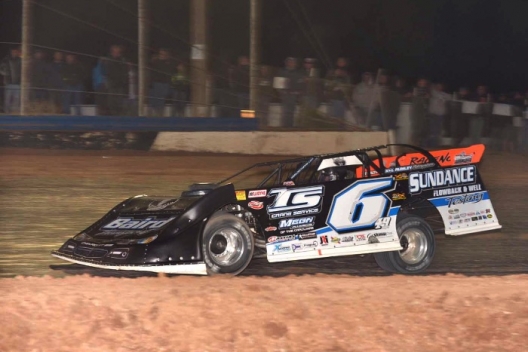 TUCSON, Ariz. — Jonathan Davenport’s chances for the Keyser Quarter-Million Challenge fell by the wayside after a difficult night in Saturday’s opener, but the 32-year-old Blairsville, Ga., driver rebounded Sunday with a $5,000 victory in the second round of the Keyser Manufacturing Wild West Shootout at USA Raceway.

The fifth-starting Davenport dove under polesitter and race-long leader Jimmy Mars of Menomonie, Wis., heading into turn one on the 27th lap and led the rest of the 30-lapper for his first victory at the 3/8-mile desert oval.

While the $250,000 bonus for sweeping the miniseries is off the table for Davenport and everyone else, there’s still a $100,000 bonus for winning five races (only Davenport and Saturday winner Don O’Neal are eligible) while four victories would pay a single driver $50,000 from title sponsor Keyser Manufacturing.

Davenport’s miniseries got off to a tough start when he was disqualified from a Saturday heat race victory for failing to report directly to the scales, and while the Lucas Oil Late Model Dirt Series champion salvaged a fifth-place finish in Saturday’s feature, Sunday’s victory provided a little consolation.

The K&L Rumley Longhorn Chassis has “been awesome ever since we unloaded,” Davenport said Sunday in victory lane. “I put us behind the eight ball last night, or maybe this would be two in a row.”

Mars, a three-time Tucson winner, settled for second in the caution-free main event while Jason Papich of Nipomo, Calif., nearly caught the frontrunners in the final laps before settling for third. Garrett Alberson of Las Cruces, N.M., scored a Tucson-best fourth-place finish while O’Neal, of Martinsville, Ind., rounded out the top five finishers.

Mars jumped into the early lead, stretching it on the second lap when Ryan Gustin of Marshalltown, Iowa, slipped high in turn one to give up the second spot to Alberson.

By the time Gustin reclaimed second from Alberson, Mars had a full straightaway lead and was cruising while Gustin, Alberson and Davenport gave chase. Mars had more than a two-second lead before the halfway point, but Gustin cut that margin in half by lap 14 as the lead pack tightened up over the next 10 laps.

While Davenport made up ground running a higher groove, he dove low in turn three on lap 24 to take the second spot. Gustin did his best to answer Davenport exiting turn two on the next lap, but a 360-degree spin took him out of contention, moving Papich into the third spot as he and Davenport continued the pursuit of Mars.

Davenport drew close to Mars as they completed the 26th lap then made a high-to-low move on the frontstretch to beat Mars into turn one. Mars powered through turns three and four to nearly nose back ahead at the line on lap 27, but Davenport — who entered the miniseries as the odd-on favorite to have the best shot at a bonus — drew away for the victory.

“The track was way different than it was last night — of course, you could see that — but it was really slick, and it was just all about momentum,” Davenport said. “I kept searching around doing a couple of different lines there and finally got to where I could get a little bit of a run off the corner.

“I had to slide by both of them there — I hope I cleared ‘em and gave ‘em enough room. That was about the only pass I was going to be able to make.”

Mars was at his best in the first half of the race, but he couldn’t maintain a winning pace.

“Yeah, we missed it a little bit. Congratulations to Jonathan there. Obviously everybody knows he’s pretty quick, so I guess if we’re on the same straightaway as him, I’m pretty happy with it,” said Mars, who was sidelined in Saturday’s prelims by radiator issues. “We just missed it a little bit there at the end. The car’s pretty good. We had some bad luck last night and took a deep breath and started over today. That’s the cool thing about being at one track. The next day’s a new day, so we’ll be working hard, just keep plugging away.”

Wild West Shootout competitors take a few days off before returning to action Wednesday evening for a $5,000-to-win event, the richest midweek event in Arizona history. DirtonDirt.com’s pay-per-view production begins at 5:15 p.m. Mountain Time with hot laps scheduled for 5:30 and racing at 7.

Notes: Austin Siebert of Grandview, Mo., scratched from the main event after transferring through a consy ... Chase Junghans of Manhattan, Kan., won the Pro Power Dash for non-qualifiers, electing to accept the $1,000 winner’s purse instead of starting on the tail of the feature. … Among Late Model drivers who entered Saturday’s action who didn’t enter Sunday: Billy Franklin and Greg Jelvik. … Seven-time World of Outlaws Sprint Car champion Donny Schatz is expected to join the field Wednesday after doing some off-season sprint-car racing in Australia. … Sunday’s show at Tucson had another sprint car star on hand with 20-time WoO champ Steve Kinser on hand, waving the green flag on the Late Model feature.