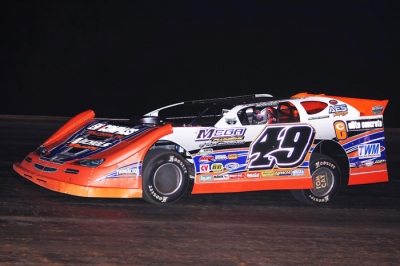 PHENIX CITY, Ala. (Nov. 8) — The 2009 racing season was already the best of Jonathan Davenport’s career, but the 25-year-old Blairsville, Ga., driver made it even better Sunday at East Alabama Motor Speedway. Davenport led every lap of 35th annual National 100 to take home the $20,000 winner’s check. | Postrace notebook | Slideshow | National 100 history

It’s by far the biggest win Davenport’s career, and the victory adds him to the record books at the 3/8-mile oval near the Georgia-Alabama border. In September, Davenport earned $7,000 for winning East Alabama’s other major race, the Alabama State Championship. Sunday's victory made Davenport just the second driver in the 31 years to sweep both events after Bobby Thomas did it in 1989 and '91.

Davenport was fast all weekend, starting in qualifying when he lowered the track record.

“I really can’t describe how great this feels right now,” said Davenport, who pilots the Barry Wright Race Cars house car. "This is definitely the biggest win of my career. You really don’t have the kind of weekend we’ve had very often. The car has been just about perfect from the time we unloaded Friday and we’ve hardly changed anything all weekend.”

Starting from the pole, Davenport jumped to the lead over Munford, Ala., driver Stacy Holmes and brought third-starting Casey Roberts, of Toccoa, Ga., along with him. Dennis Erb Jr. of Carpentersville, Ill., also passed Holmes on the start and joined Davenport and Roberts in pulling away from the rest of the field.

The three drivers ran nose-to-tail, reaching lapped traffic by the sixth lap of the race. A number of cautions throughout the first 20 laps gave breaks to slower cars that would have otherwise fallen victim to the torrid pace set by the three leaders.

All the while, eight-time National 100 winner Scott Bloomquist of Mooresburg, Tenn., was working his way to the front after starting from the 21st position. Bloomquist won a consolation race earlier on Sunday to transfer to the feature race, after skipping Saturday’s preliminary action to compete in the World of Outlaws World Finals at the Dirt Track at Lowe’s in Concord, N.C.

Bloomquist moved into the top 10 by lap 12, and was up to fifth on a lap-30 caution. On the restart, Bloomquist split the cars of Jake Knowles and Roberts to move to third then grabbed second from Erb six laps later.

But even with more than 60 laps to find a way around Davenport, Bloomquist was unable able to complete the pass for the lead. He pulled alongside Davenport a number of times in lapped traffic and on restarts, but Davenport fought off all of the Hall of Famer’s challenges.

After the race’s final caution on lap 84 gave the leaders clear racetrack, Davenport pulled ahead of Bloomquist by five lengths on the restart and maintained that lead in the final 15 laps to secure the victory.

“I’m just glad it didn’t push the cushion off the top,” said Davenport of the tacky and ultra-fast racing surface. “The top was really working for me and if it went away, he probably could have got by on the bottom.”

Davenport admitted he saw the nose of Bloomquist’s car on more than one occasion, but said his main worry was avoiding lapped traffic.

“I could see him a couple of times coming off of turn two, and I could hear him under me on the restarts,” explained Davenport. “But the only time I really got worried was late in the race when about five lap cars were there racing each other in front of us and weren’t moving. I didn’t want to go between them, but that was really the only option I had. Finally, that last caution came out and we were pretty clear from there.”

And for the breakout year he’s had, Davenport credits experience. The experience he has gained as a driver and the experience of his car owner, legendary chassis builder Barry Wright of Cowpens, S.C.

“Being able to branch out and travel to different tracks this year as helped me learn so much,” Davenport said. “And I know I wouldn’t have had the kind of year we’ve had if it wasn’t for Barry Wright. That man knows more about these cars than most people will ever come close to knowing.”

The second-place finish is the second in four days for Bloomquist. The first came Thursday night at Lowe’s. He also scored a $10,000 victory at Lowe’s on Friday, then finished 10th Saturday before heading to East Alabama early Sunday morning.

“The racetrack was really fast tonight and the car was great,” Bloomquist said. “The outside groove was just too fast for us to get by him on the bottom.