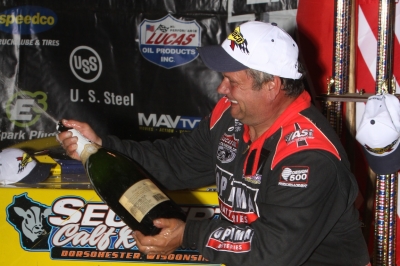 “I’m telling you, just ‘Wow!’ I’m sort of speechless,” O’Neal said. “I just kept telling myself the whole race, the whole race, just be patient, be patient, ride, ride, ride. I was just waiting an an opportunity there, and it just came there. I mean, racing in the rubber, you know, it’s just one of those things I had to take, and I’m telling you, this pays off ... we had this race taken away a couple of years ago, and to turn it around and win it at the end of it, that’s pretty special.”

Owens, who for 84 laps looked like he was on his way to becoming the first four-time North-South winner, couldn’t keep up with his fellow front-row starter in the final laps. The Lucas Oil Series points leader from Newport, Tenn., settled for a second-place finish and pointed to damage just above the “2” of the No. 20 on his driver’s side door in accusing O’Neal of rough driving.

Eighth-starting Steve Casebolt of Richmond, Ind., ran a solid third with Rick Eckert of York, Pa., fourth, the only other drivers who managed to keep pace with the frontrunners on a night when the racing groove filtered down to one lane after 40 laps. Steve Francis of Ashland, Ky., who started 10th, was a distant fifth and the top finisher among five home-state drivers.

O’Neal entered Florence’s 30th annual event with memories of his bitter 2009 loss to Jimmy Mars, who blew past just before the white flag after O’Neal dominated more than 70 laps.

This time around, it was O'Neal doing the chasing as Owens appeared content to run behind slower cars in the second half of the race with virtually every competitor hugging the inside lane.

The strategy worked for Owens when he was behind a single car, but when a couple of slower cars on the backstretch forced Owens to briefly check up on lap 85, O'Neal pounced.

He tucked his No. 71 as low as it would go and appeared to slip past cleanly, making contact as he pulled ahead in turn three with Owens struggling to maintain control. Owens scrambled to fight off Casebolt and try to regain the lead, but caution a lap later reset the field and O'Neal led the rest of the way.

The 100-lapper was slowed by six cautions, all for single-car incidents, and with the exception of Casebolt’s charge into contention, the entire race hinged on the pass for the lead on lap 85. O’Neal and Owens, whose crews did some jawing immediately after the incident and again after the race, saw it differently.

“He had to check up early down there (entering turn three),” O’Neal said. "He caught some lapped traffic just at the wrong spot right there and had to get out of the gas early getting into (turn) three. I just pulled underneath him, you know, and drove up through there. It’s just one of them deals where he just let off at the wrong spot at the wrong time.”

O’Neal said that “without a doubt” the opening was large enough to make a move. "And I don’t know anybody we race with that wouldn’t take it,” he added.

Again recalling his defeat three years earlier, O’Neal understood why Owens and his crew weren’t happy with taking home $10,000 instead of $50,000.

“To lead the whole race like that, and get passed at the end,” O’Neal said. "I mean, we did make some contact. I know what that feels like, you know. I lost it a couple of years ago toward the end. Man, it’s the North-South, and we’re racing in the rubber, and we don’t have many races left.”

Owens joked that O’Neal’s head might not be clear after a hard accident a week earlier at Cedar Lake Speedway’s USA Nationals in New Richmond, Wis.

“You know, obviously there was an opening there because he took it,” Owens said. "Still, we had openings at the Dirt Track World Championship to do something like that to him, and out of respect, I try not to do that to people, you know. I don’t guess I’m feeling the love right now.

“It’s pretty disappointing, especially when we had a real good car. ... we had the car to beat all night long. It’s just a pretty crappy way to lose a race, but like I say, I guess he’s happy.”

Casebolt and Eckert were among interested third-party observers, hoping they might capitalize on a tangle among the frontrunners.

"The way that it worked out, there were lapped cars in the way, and I was so close to O’Neal that his car was blocking me, blocking my view of were Owens was even at,” Casebolt said. “And they got together, but it just all kind of happened in a flurry there. I can’t tell. I don’t know whether the contact was terrible or not that bad. I don’t know. I do know that Owens got sideways, and I wanted to capitalize on that. And I got right up beside him and just couldn’t make it happen.”

“It’s a $40,000 difference in second and first. What do you do?” Casebolt asked, putting everyone in O’Neal’s seat. “I don’t think (the purse difference) caused any of this. I think O’Neal would’ve done whatever he would’ve had to do to win this race for $5. It is what it is.”

Said Eckert: “It was typical racing on a one-laned racetrack. There was room there, and, you know, I think Jimmy was in fine shape, and I think the lapped cars checked up in front of him, and he had to check up in a spot to where when he checked up it got him a little bit crooked. Then Don filled the gap.”

O’Neal was just glad to be the one out front at the end instead of watching another driver celebrate in victory lane by spraying champagne and picking up a $50,000 check.

“I think I was better off not leading the whole race,” O’Neal said. "That way someone else could set the pace tonight, and I got to just sit back there and ride.”