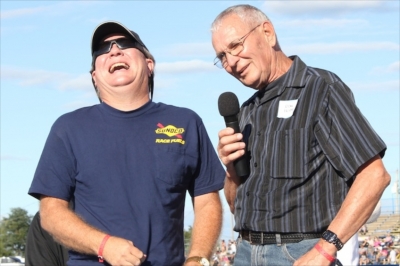 UNION, Ky. (Aug. 11) — The reigning and two-time IMCA Late champion, a legendary Texan, a pair of chassis-building brothers and a beloved car owner are among seven inductees being inducted Saturday in as the Class of 2012 for the National Dirt Late Model Hall of Fame. | Complete North-South coverage

Mike Balzano: The Hall's first inductee who was based in West Virginia his entire career, the Parkersburg racer won three series championships over a four-year stretch and retired with more than 300 victories. A mainstay on the STARS circuit, he's fourth on the all-time series victories list (32) and won back-to-back titles in 1989 and '90. He also won the All-Star Circuit of Champions title in '87. He was a two-time winner of the USA 100 in Beckley, W.Va., and captured the '98 Mello Yello 100 at Volunteer Speedway in Bulls Gap, Tenn. His winningest STARS season came with seven victories in 2000. He was a six-time series runner-up.

Kenny Brightbill: Already a member of the DIRT Motorsports Hall of Fame for his standout big-block modified career, the Sinking Springs, Pa., dirt racer had most of his Dirt Late Model success in the early '80s. He was a two-time winner at East Bay (Fla.) Raceway's Winternationals, captured the 1984 NDRA 100 at Metrolina (N.C.) Speedway, and won the 1985 Jackson 100 at Brownstown (Ind.) Speedway. Brightbill's three consecutive World 100 starts included a runner-up finish in 1984. He also made six career NASCAR Winston Cup starts.

Ray Guss Jr.: The Milan, Ill., driver has more than 500 career victories and is still racking them up, last year capturing his second straight championship in overall IMCA points and contending again this year. Guss won three track championships for the second straight year and is in contention for his second straight title on the IMCA-sanctioned Deery Brothers Summer Series, where he's tied for fourth in all-time victories with 22. Before his success in IMCA's spec-engine division, Guss was an accomplished open-competition engine racer, four NASCAR Central Region crowns and the 1999 title on the NASCAR O'Reilly All-Star Tour, where he was the third all-time winningest driver. Among major victories were the '92 Yankee Dirt Track Classic at Farley (Iowa) Speedway and the '88 Johnny Appleseed at Eldora (Ohio) Speedway.

Doug Ingalls: The most successful member of the famed Longview, Texas, racing clan, Ingalls racked up more than 600 career victories in Late Models and modifieds combined. He's a six time champion between a pair of regional tours, capturing three NCRA championships over a five-year stretch beginning in 1985 while collecting three SUPR titles over the next five years ending in 1994. He's eighth in all-time NCRA victories and second in all-time SUPR victories. Among his biggest victories came on the Hav-A-Tampa Dirt Racing Series in '94 at Pike County Speedway in Magnolia, Miss., and a SUPR victory at Texas Motor Speedway in Fort Worth. He was a three-time Louisiana State Champion at Boothill Speedway and won the '96 Gulf South Championship at Baton Rouge.

Don Hobbs: The retired racer from Bloomington, Ind., was among the Hoosier State's top drivers in the late '70s and early '80s, racking up 54 victories in Rayburn house car in '79 and '80 alone. Among his major victories were the Southeastern Winternationals at Volusia County (Fla.) Speedway in '80, the '80 NDRA 100 at Hawkeye Downs (Iowa) Speedway, the '85 and '86 Kentucky Klassic at Barren County Speedway and a two-day sweep of All-Star Circuit of Champions action in '81 at Lincoln Park (Ind.) Speedway. Hobbs was a five-time World 100 starter with a best finish of fourth in 1982.

Contributors to the sport

Raye Vest: A long-time team owner from White Plains, Md., who had most of his success with Rick Eckert, Vest's 2009 death was mourned throughout the Dirt Late Model community. The Vest-Eckert combination over a 15-year stretch resulted in two championships on the Xtreme DirtCar Series and victories in notable races including Eldora (Ohio) Speedway Dream, the Dirt Track World Championship and twice at East Alabama Motor Speedway's National 100. Before connecting with Eckert in 1995, Vest fielded cars for Hagerstown (Md.) Speedway regulars George Moreland, Nathan Durboraw and Rodney Franklin. Winchester (Va.) Speedway hosts the annual Raye Vest Memorial as a tribute.

In addition to the contributors to the sport, Jimmy Owens of Newport, Tenn., will receive the annual Sportsman Award. Owens is the current Lucas Oil Late Model Dirt Series points leader and former World 100 champion. And late Kentucky driver Walter Combs was honored with a Lifetime Achievement award.