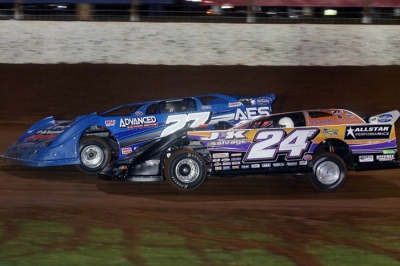 Rick Eckert (24) is looking for his first World of Outlaws title. (pbase.com/cyberslash)

CONCORD, N.C. (Nov. 4) – Jonathan Davenport may have taken the excitement out of watching the front of the field as he dominated Friday night’s opening round of the Lowes Foods World Finals presented by Tom’s Snack, Coca-Cola and Nature’s Own, but there was still plenty of reason for fans to keep their eyes on the 50-lap World of Outlaws Late Model Series main event at The Dirt Track at Charlotte.

With 14 points separating series title contenders Rick Eckert of York, Pa., and Josh Richards of Shinnston, W.Va., entering the two-race weekend at Charlotte’s 4/10-mile oval, each position either of the two drivers gained or lost during Friday's $10,000-to-win feature was critical in the chase for the $100,000 World of Outlaws championship. | Complete World Finals coverage

After earning a fifth-place starting position thanks to his heat race victory, Richards, the national tour’s two-time defending champion, appeared poised to overtake the 18th-starting Eckert, who only managed a third-place heat race finish, and grab the points lead heading into Saturday night’s series finale at Charlotte.

But Eckert picked up six positions throughout the caution-free race and kept his points lead intact, barely.

“I knew our car would be good come race time, but I just didn’t think we’d struggle that bad in the heat race,” said Eckert, who will carry a scant two-point lead into Saturday’s race. “In the feature my car maneuvered well. I’d pass the guys and catch ‘em, but the problem is when you have no cautions, everyone gets spread out.”

While Eckert was happy to have held on to the points lead even after digging a hole in Thursday night’s qualifying and failing to move up in his heat race, Richards, the event’s fastest qualifier, was disappointed he couldn’t capitalize even more on the good starting position. He failed to advance in the race and actually dropped a position in finishing sixth.

“We can’t be ashamed of our finish. But me as a racer, I just feel there were some things on the car we could’ve changed and been a little bit better,” Richards said. “I wish we could’ve ran better obviously, but we’ll still take the point gain for sure.”

The finish sets up another dramatic night at The Dirt Track on Saturday as the track hosts Eckert and Richards, along with 64 other Super Late Model competitors, for the tour’s final event. Eckert will have the upper hand in Saturday’s heat races. He’s scheduled to start second in the third heat while Richards will roll of third in the fifth heat.

“We know what we gotta do tomorrow. We know we gotta finish ahead of Eckert,” Richards said. “He’s gonna be tough. He’s on the front row of a heat and we’re starting third tomorrow. It’s gonna be interesting for sure and I’m gonna do what I can to pull it off.”

Likewise, Eckert will do he all he can to claim his first series title.

“It is what it is,” Eckert said. “We’re gonna race until the last lap of tomorrow night and hopefully we come out the winner.”

Hubbard looks to bounce back from Friday’s slow start

As fast as Jonathan Davenport was in Friday’s main event, he likely would have made it to the front at some point no matter who got the hole shot on the race’s initial start. But a slow fire by fellow front-row starter Austin Hubbard of Seaford, Del., allowed Davenport to easily pull ahead on his way to a dominant victory.

Meanwhile, Hubbard, the 19-year-old driver in his second year on the World of Outlaws tour, dropped to fifth by the first corner.

“It was just a real bad start for me,” said Hubbard, who remained in the top five the entire distance, battling with Chris Madden and Josh Richards to hold on to fifth at the finish. “I don’t think it really mattered. He was gonna win regardless.”

Even though he failed to capitalize on a pole starting spot, Hubbard was still happy to pull off the top five against some of the sport’s top drivers.

“We still had a really good car tonight,” Hubbard said. “I think the top two through six were really even and putting on a good race. Just to be involved with some good racing up front, that’s important to me.”

Running up front is important for Hubbard because he’s looking for a ride for 2012 after car owner Dale Beitler announced last month he would retire at the end of the season. With the World Finals at Charlotte attracting the most attention of nearly any annual Dirt Late Model event, Hubbard knows a pair of strong runs in the World of Outlaws doubleheader could possibly impress a potential team owner or sponsor who might could step in and help him remain on the national tour next season.

“If there’s a time to shine, it’s here,” Hubbard said. “For us to run like we did tonight, that put some eyes on us and that’s what we needed to do. I’m pretty uncertain of what’s going on or what I’m gonna do (next year). I’m pretty much open to anything.”

Hubbard also knows that bouncing back with a win in Saturday’s race, an event that will be televised live by the SPEED network, could be big in attracting a new financial backer.

“People want to win races and run up front, so you gotta prove that you can do that,” said Hubbard, the 2010 World of Outlaws Rookie of the Year who has two series victories in his young career. “I think we’ve proved that we can do it, but we’ll keep working at it and hopefully get another good finish tomorrow. If we can maybe get a win here on TV, that’d be great and hopefully I’ll get a phone call Monday.”

The start of the feature wasn’t Hubbard’s only conspicuous start on the evening. He was involved in a botched start in the third heat race that resulted in polesitter Mike Marlar of Winfield, Tenn., being penalized a row. Hubbard went on to win that race while Marlar never recovered in finishing fourth and had to go to a consolation race in order to make the feature lineup.

After the race, Marlar was frustrated with the ruling and said it cost him a shot at a top-five finish in the main event.

“Jonathan was really the class of the field, but I don’t think any of the rest of us guys was too far off each other,” said Marlar, who ended up 18th in the feature. “I definitely feel like track position was worth a ton tonight and that cost us a huge amount of spots right there.

“I wasn’t real happy about it because if I went too early, it wasn’t by very much,” Marlar added. “Anytime you race a series of any sort, when you’re a guy like me who just travels and does whatever, you know a series takes care of its (regulars). I don’t think they would (penalize) a guy who races with them 50 times a year.”