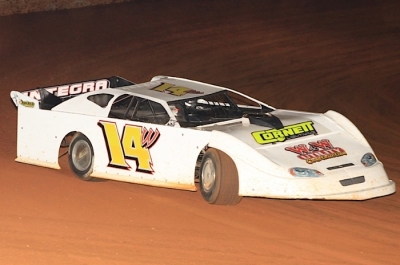 CLARKSVILLE, Tenn. (March 8-9) — Dustin Walker had struggled enough in his brief Super Late Model career to realize he needed to make some changes if he wanted to be competitive. The 31-year-old driver from Peculiar, Mo., wanted stronger powerplants, better equipment, more knowledge and a capable team hauler, and he sat out most of the 2012 season while aiming toward 2013.

“It was actually fun,” said the bearded, round-faced Walker. “I was dreading the whole day. By the time I got up until we qualified, I was dreading the whole day. Just whenever we go to a new place, I’m just trying to figure it out. We’ve had such bad luck. We’ve always been out in left field with shock stuff, and now we have the right stuff and good stuff that makes it a lot easier — apparently — to show up somewhere you’ve never seen before and run well.”

Walker, who failed to make Saturday’s feature after getting tangled up in preliminaries, is gunning for the MARS Rookie of the Year honors. Besides his competition, Walker’s biggest worry is that his schedule with W&W Utility Construction, which sometimes takes him to Texas or Louisiana, will make following the circuit difficult.

Walker, who raced in street stocks and modified at the now-closed Adrian (Mo.) Speedway before stepping up to Late Models a few years ago, already won rookie honors on the Lucas Oil Midwest LateModel Racing Association in 2011. But Walker doesn’t put any window-dressing on his actual performance two seasons back. “We had a horrible year,” he said.

“We just stuck with it ... We had a horrible year,” he repeated. “I think we missed the first six shows — couldn’t even qualify. We were just too stupid and stubborn to quit is what won us that deal. Just late in the year we finally got it together and were making the shows and running from 10th to 15th and just stuck with it.”

Although Walker made a half-dozen starts in 2012, his focus was on 2013 as he purchased Tony Jackson Jr.’s Rocket Chassis built in Darrell Lanigan’s shop, got new Cornett motors and a spacious hauler. The connection with Jackson, who Walker pitted next to at Clarksville, came with needed assistance to get more racing knowledge.

"A lot of shock help, a lot of car help, chassis help, setup help — making sure that we’re going what we’re supposed to be doing and not being lazy,” Walker said.

“I knew after we raced the MLRA deal, we were going to have to have better equipment, and to be on the road, we needed a hauler, something to be comfortable in. It’s hard to be at hotels and have to pack all your stuff up, so we’ve got a hauler, I knew we were going to need better equipment, so we just kind of did a part season (in 2012), raced our old stuff and saved some money to buy some new stuff and try it again this year.”

Walker’s fourth-place run is far and away his best Super Late Model performance. He can never remember running better than eighth previously and hopes his work schedule allows him to follow the MARS tour. He’s hoping Jackson can help maintain his equipment when he’s working, and if he’s out-of-state for work he’ll line someone up to drive the hauler to he can meet them at the racetrack.

“I’m just hoping that down the stretch we don’t get on work that’s too far away,” Walker said, pumped after his top-five performance in his season opener. “I had no idea it was going to go as well as it is.”

At last year’s Tuckassee Toilet Bowl Classic, a single Clarksville regular cracked the top 10 either night of action. But local drivers turned that around this year with a half dozen cracking the top 10.

Most notable was Caleb Ashby of Cunningham, Tenn., who scored two top-three finishes, and Clayton Miller of Elkton, Ky., who was runner-up to Brian Shirley in the finale.

Miller, whose Late Model action came in the Crates last season, made a rare Super Late Model start while also capturing the modified finale at Clarksville.

Justin Wells of Aurora, Mo., was among the MARS-area drivers making the trip to Clarksville, and he was among the fastest cars while scoring a fourth-place finish in Saturday’s finale.

But the 36-year-old Wells says he’s not even sure if he’s the fastest driver in his family with 17-year-old son Cole showing promise in the Late Model division. The elder Wells won the Monett (Mo.) Speedway championship last season, but his son finished a solid fourth in points and performed admirably.

While Justin Wells says he struggled and scrapped to become a standout driver, he sees something different in Cole. “He’s got natural talent,” the elder Wells said. “He’s just gets out there and goes ... he goes like hell.”

The younger Wells didn’t make the trip to Clarksville — “He’s at home working on his car, actually,”ï¿½ Justin said — but he’ll be ready for his father and Missouri competitors when the regular season gets rolling.

Jeff Babcock of Wayne, Ohio, made fewer than 30 Late Model starts for car owners Shane and Jennifer Halcomb last season as the team struggled to keep engines ready for action.

But the 32-year-old Babcock, who made his 2013 Late Model debut during Clarksville’s doubleheader weekend and scored an 11th-place finish Saturday, is just getting started this season. Shane Halcomb, whose has been joined by Eric Brock of Best Performance Inc. as team co-owner, said the team has sketched out a schedule of 85 events, keeping the team plenty busy.

Besides the Late Model, Babcock will frequently run his open-wheel modified with teammate Matt Westfall — the duo already had a busy Florida Speedweeks in mod action — and also plans to compete in the NASCAR Camping World Truck Series event at Eldora Speedway, where he’s aiming for the Late Model and modifieds championships.

Babcock's busy season is thanks to Brock, Shane Halcomb said, a quiet and low-key supporter who works tirelessly at multiple businesses and has stepped up to boost the team in a big way.

“It makes it a lot more enjoyable when you don’t have to spend every dollar of your own,” said Halcomb, grateful for Brock’s contributions.

The team hopes to follow the Sunoco American Late Model Series East Division along with running several events with the UMP DIRTcar Summernationals, which will allow the team to run Late Models and modifieds as many as five straight nights over a six-week stretch.