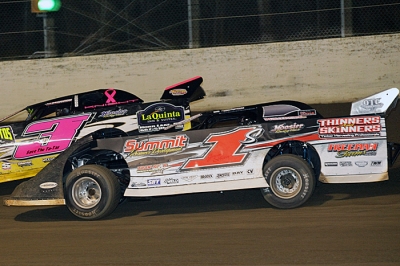 COLUMBUS, Miss. (Nov. 20) — Jeremy Shaw of Millport, Ala., raced to his first career NeSmith Chevrolet Dirt Late Model Series win Sunday in the Black Ice 40 at Magnolia Motor Speedway. Shaw went from third to first with an outside move on a lap-21 restart and never looked back en route to victory on the Crate Late Model circuit. | Slideshow

Shaw had come close to his first win many times this season by leading laps, winning two fast time awards and posting a runner-up finish. He won the 2010 NeSmith Chevrolet Weekly Racing Series Invitational Race, but Shaw said all of that doesn’t come close to winning touring event.

“It feels great to finally win a NeSmith Chevrolet Dirt Late Model Series Touring race,” Shaw said. “We’ve come set fast times, led races, and even won the Weekly Racing Series Invitational Race, but this feels a lot better. We come so close before, but this is a really great feeling.”

Shaw lined up in the third spot for a lap-21 restart, and the green flag came out, he went to the high-side of the track to pass the second-running Eric Cooley of Fulton, Miss., and leader Larry Harrod of Plains, Ga. Shaw took the lead coming off the fourth turn, and led the rest of the way.

“I took it easy the first half of the race because my car was running a little hot, but we turned it loose in the second half,” Shaw said. “I ran into some heavy lapped traffic at the end of the race, but my crew was giving me signals on how far back the second-place car was.”

Cooley, a two-time series champion, ended up second with his teammate Harrod in third. Shannon Lee of Lumberton, Miss., and track promoter Johnny Stokes of Columbus rounded out the top five.

Series points leader Dan Breuer of Troutman, N.C., was sixth after starting 20th, virtually guaranteeing the championship after stretching his lead in the title chase over David Gentry to 54 points. Gentry finished 10th. Breuer will clinch the title by merely taking the green flag for the Dec. 3 series finale at East Bay Raceway Park in Gibsonton, Fla.

Rodney Wing of Meridian, Miss., winner of the previous night's series event at Whynot Motorsports Park, started 23rd in a borrowed Billy Riels Racing Special and finished eighth to earn the Hedman Husler of the Race Award. Wing raced his way into the main event driving his regular ride, but used the Reils machine after mechanical problems struck.