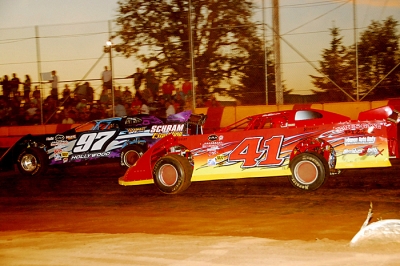 Seventh-starting Joey Tanner of Portland, Ore., also worked his way by Workman to finish second at the third-mile racetrack. Workman, who passed both Walters and early leader Jason Wines of Lebanon to take the lead on lap four, settled for third at the end of the race while Terry Ferrando of Keizer and hometown driver Rob Ireland rounded out the top five finishers. Wines finished sixth.

Notes: Walters’s Jimmy Schram-owned Victory Circle Race Car is sponsored by Schram Excavating, Warpaint Motorsport Graphix and T&G Trucking. .... The race was slowed by five cautions. The first didn’t appear until lap 25 and was for the winner’s car owner, who suffered engine woes. Three of the other cautions involved just one car, while another was for a tangle between Jason Johnson of Greshham and Scott Puncochar of Newberg. ... The series returns to action June 11 with another $1,000-to-win race at Cottage Grove (Ore.) Speedway.