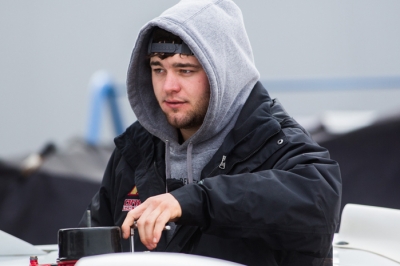 BRUNSWICK, Ga. (Feb. 3) — Practice makes perfect. Brandon Overton of Evans, Ga., is one of the first drivers to attest to this adage.

With engine problems knocking him out of Thursday’s open practice session at Golden Isles Speedway, Overton’s Georgia-Florida Speedweeks campaign got off to a bit of a slow start. Entering Friday’s Lucas Oil Series opener as the defending race winner, the Dream Team driver finished a quiet 19th in the 50-lap feature. | Complete Speedweeks coverage

In today’s Dirt Late Model world, every little bit of testing can make all the difference, Overton said.

“We came down here and practiced and one of our motors messed up,” Overton said. “We’ve only got two. That kind of put us behind. We didn’t get to practice at all. It’s just hard to come down here. You really need to come down here and get a head start, go ahead and start testing when everybody comes down here to test. It’s just hard to do that. My crew guys are the ones that build the cars for all the customers. That put us behind. I’m sure we’ll get it all figured out.”

Overton appeared to improve on Saturday. But after lining up ninth in the feature starting grid and running as high as second, he was forced to retire early when a rattling noise in the engine compartment of his Longhorn Chassis left him fearing more problems. While Overton wants to run well in the early Speedweeks events, his main focus is on the World of Outlaws Craftsman Late Model Series title chase, which kicks off on Feb. 9 at Screven Motor Speedway in Sylvania, Ga.

“I think we’re going to be fine,” Overton said. “We didn’t get to come down here and test, so we’re going to race as much as we can 'til Screven and when Screven comes around, that’s our main deal. We need to run good at Screven and we need to run good at Volusia. Whatever happens from here to there, we don’t care. We’re racing and we’re trying to make money. But our main goal is to start out good at Screven.”

After running primarily a regional schedule last year, the Georgia driver is excited to return to the WoO tour in 2018, this time with the Randy Weaver and Chip Stone-owned race team. He understands that following a national tour is a challenge, but Overton feels like he’s in a position to do well.

“I’m happy,” Overton said. “I wish we could have done it last year. I felt like we kind of had an advantage. A lot of guys have caught up over the winter. I wish we would have done it then, but we’re up for the challenge. We’ve got good guys helping us, good guys working on the car. We’ve got a bunch of good sponsors. I’m ready.”

It’s only been a couple of nights, but Steve Francis of Bowling Green, Ky., is already settling into his new role as technical director for the Lucas Oil Series. He’s quickly learned there’s a lot more ins and outs to the officiating side of things than he initially realized when he was competing as a driver with the series.

“It was a lot harder than I thought it was going to be,” Francis said with a laugh. “It wasn't really what I expected. There’s a lot more that goes on behind the scenes. When I got on this side I didn’t realize how much there was to everything that everybody on the whole Lucas Oil staff does. That was probably my biggest shock. As far as the tech stuff, that was pretty much what I had expected.”

Francis and his fellow series officials ruffled a few feathers on Friday as several Golden Isles entrants were sent back to their haulers to make adjustments after tech inspection. But the rules are the rules, Francis said. And they are going to be enforced.

“We were trying to give everybody the benefit of the doubt. We didn’t make anybody come back through tech. We just told them it had to be right and that was why you saw so much spot-check stuff going on through tech line. You’re going to see the same thing at all of our races the whole year. As a racer, we’re all pretty much smart enough to get a car through the tech line then go back here and feed it a little shot of miracle grow and race it the rest of the night. That’s the kind of stuff that’s not really going to go anymore.”

Naturally, this trip to Georgia-Florida Speedweeks is different from what Francis has always been accustomed to. While he might miss physically being in the driver’s seat, he’s still enjoying his new position.

“I was so busy last night, I didn’t even … I can’t say I don’t miss driving a race car, because that’s all I’ve done for 35 years. But as far as being here and having to race and go through everything, I actually shocked myself. I didn’t miss it. I actually enjoy what I’m doing.”

Fitzgerald’s trip Down Under

Jason Fitzgerald of Middleburg, Fla., was one of several drivers making the journey to Australia for January’s USA Invasion tour. Piloting a Ryan Halliday-owned Longhorn Chassis, Fitzgerald came away with a victory at Perth Motorplex. His Australia trip is becoming one of his favorite traditions.

“The Hallidays, Ryan Halliday and his family, put me in their new Longhorn,” Fitzgerald said. “We went over there last year and got invited back again this year. I just got in there and they did everything. We had a lot of success, won the first night. I messed up the second night and we had a good race there with Tyler (Erb) the last race, just lost it the last two laps. But we had a good tour.

“I’ve been helping (Halliday) for a couple of years over the Internet and the phone. They actually bought a new Longhorn from me this year and since he’s got in it he’s been running really good. It’s kind of becoming a tradition where we go over there for the USA tour. It’s good to have people like that, like family really, that bring us over there and treat us like royalty and let us race.”

After failing to qualify for Friday’s Lucas Oil opener, Fitzgerald transferred to Saturday’s main event through his heat race, only to get caught up in a mid-race pile up. Along with Golden Isles, the Florida driver is planning to enter Speedweeks events at Bubba Raceway Park in Ocala, Fla., and Volusia Speedway Park in Barborville, Fla.

“When you do this with these guys, you’ve just got to keep your head right because it’s tough and humbling,” Fitzgerald said. “It will beat you down and it will pick you back up the next day. So you’ve just got to go in with a clear mind and whatever happens, happens. Yesterday is gone and today is a new day.”