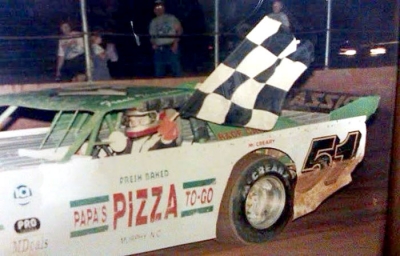 Although not unexpected, the news wasn’t good, and it hit a whole lot harder than a bad qualifying lap. Looking down at the text, Cook’s eyes teared up as he read the message from his former crew chief and close friend Gary Thompson, whose older brother had just passed away after a bout with cancer.

A few days earlier in the middle of his annual 11-race touring series that carries competitors to 11 tracks in 15 days, Cook had received notice that 62-year-old Frank Thompson’s struggles with cancer didn’t leave him much time. The prognosis had changed quickly from two years to live down to two days to live, and everyone knew the bad news was imminent. Cook, the Brasstown, N.C.-based racer and promoter, wanted badly to head home to visit with his friend, and to see the former racer while he could.

“I still wish I’d gone home to see him,” Cook said. “I wanted to do something, but there was nothing I could do but pray.”

It was Gary Thompson who discouraged Cook from making the overnight trip after a race night, since Cook would have had to almost immediately turn around and head back to his racing series. The pair did talk during the afternoon at Swainsboro, a cell phone conversation that lasted more than an hour.

“Gary and I spent some time on the phone today, and he’s doing OK,” Cook said. “After a while, he just said he’d rather talk about racing. They were pretty close, so I know he was struggling. He finally said he just wanted to talk about something else, so we discussed shocks, springs and the latest chassis developments. I think it helped take his mind off the situation with his brother.”

It was a natural path of conversation for men who spent much time on the road together, chasing the country’s biggest events. While the Cook-Thompson duo established their Brownie Brown-sponsored team in the late 1990s on the Hav-A-Tampa Dirt Racing Series, Frank Thompson was content to mostly race around his home in western North Carolina, frequenting on a regular basis such facilities as Cleveland (Tenn.) Speedway, North Georgia Speedway and Tri-County Racetrack, the Brasstown oval Cook now manages.

Frank Thompson did chase the Southern All Star Dirt Series around on occasion, and one year finished in the upper tier of the points standings on the B.J. Parker-promoted tour. While he never attempted to crack the national scene, the family-owned team raced as long as they could afford to do it, finally selling their equipment in the late ‘90s when expenses caught up with the dream. They were simply local racers who loved the sport, and those types help form the backbone of the industry. They did whatever they could to participate, and fans will long remember the John Boy Exterminating sponsorship that adorned their cars. It was their family business that provided the means to race, and Frank Thompson became a well-known regional competitor who gathered many friends and fans along the racing path.

“He always had a good sense of humor, and he really helped me a lot when I started racing a pony stock at Tri-County early in my career,” Cook said. “I’ve had a lot of help from many people in this sport, but none have helped me more than Frank did. He made a real difference for me when I needed it.”

“I didn’t even have a garage at the time, so I had no place to even keep my car. They kept their stuff in several different shops around the county, and I just kinda followed them wherever they moved. Gary helped me build my first car, and it seems we’ve always been around each other, and a part of each other’s lives.”

On Saturday afternoon, Cook announced at Screven Motor Speedway that the remaining 53-lappers on the series (including Screven) would instead be 51 laps to pay respects and to honor his late friend, who always used No. 51 on his race cars.

“I think that’s a good way to honor his memory,” Cook said. “He wasn’t racing no more and hasn’t for a number of years, but we’re all sure gonna miss him.”

“He always had a good sense of humor, and he really helped me a lot when I started racing a pony stock at Tri-County early in my career. I’ve had a lot of help from many people in this sport, but none have helped me more than Frank did. He made a real difference for me when I needed it.”