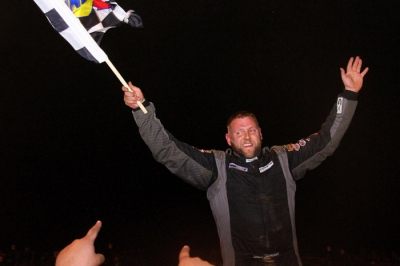 As the 2010 Florence track champion climbed from his the Rattliff Motorsports No. 16 on the frontstretch, he was met by the father of his late friend and local racer Terry Lanigan, who died in January from injuries sustained in an ATV accident. The two men embraced, and the usually reserved Jameson was tearful in dedicating the $5,000 victory to Lanigan.

“It was a good race,” the bearded Jameson told track announcer Brad Greer, his voice cracking. “I gotta thank a man up above — Terry Lanigan. If it wasn’t for that yellow, we wouldn’t have won the race.”

Indeed, it was the momentum from the 50-lapper’s final caution that propelled Jameson to victory lane. The Indiana driver had attempted to reel in the defending Sunoco North-South 100 winner around the halfway mark, but Pierce still held a dominant lead when the yellow flag flew on lap 46.

Jameson set his sights on Pierce as the race went back green, sliding ahead of the No. 32 in turn two to lead lap 49. With the white flag waving, Jameson made one last circuit, scoring his first career Spring 50 victory.

“I don't know if we'd had gotten him if that yellow one came out, but that's how racing goes,” Jameson said. “Sometimes it helps you, sometimes it’ll lose you. We were reeling him in, but I don't think we had enough laps to get him. That yellow came out and I think his tires were giving up, and it gave me an opportunity there to come off four. He pushed and I just compromised on what I had.”

As the race reached the halfway point, Pierce and Jameson held nearly a half-track lead over the remainder of the field. A yellow flag waving on lap 24, Jameson had to battle back past fellow Indiana natives Steve Casebolt and Devin Gilpin to put himself in a position to win the unsanctioned event.

“I was catching (Pierce),” Jameson said. That yellow came out and Casebolt, I don't know what he was doing. He kind of slid me on that restart, holding me up. It took me forever … I let Pierce get a halftrack lead on us. I was reeling him back in, but like I said, if it wasn't for that yellow, Pierce probably would have won it.”

Jameson is no stranger to Florence victory lane. Along with his track title, the Indiana driver is a former Fall 50 and UMP DIRTcar Summernationals winner at the northern Kentucky oval. But Saturday’s win was extra special.

“This one means a lot to me, just because my buddy Terry, he passed away in a RZR accident,” Jameson said. “He helps me every time. We're out here, he's underneath my car. He believed in me.”

Lanigan, the nephew of three-time World of Outlaws champion Darrell Lanigan, often served as a crew member for Jameson. While he wasn’t physically at the racetrack Saturday night, Jameson said he still knew he was there watching.

“He wasn't full time, he had his own business,” Jameson said. “He really didn't help me at the shop, but if he could, he would. When I raced for Darrell and had his car … even racing this car, he would be here right now, if he was here. He couldn't make it.”

Jameson’s victory came behind the wheel of the Campbellsville, Ky.-based Rattliff Motorsports No. 16. After driving for the team some last season, Jameson expects to continue racing with them in 2017.

“They called me last year, or actually asked me at North-South last year, if I'd be interested in driving a car a couple of races at the Lucas Oil show,” Jameson said. “We ran good at Ponderosa, came to Lawrenceburg and we had motor problems. We took that same motor to Eldora and it still had problems.

“They fired me then,” Jameson said with a laugh. “I think they thought I was lying to them about the motor, so they took (Steve) Francis down to Charlotte and Francis said the motor didn't run. Then they asked me this year to go to Florida and I think they want me to drive for them all year. We'll try it out, see how it works out.”

After a somewhat up and down 2016 season, a big win at the start of the year is a confidence booster for Jameson. Especially when that victory comes over one of the past season’s winningest drivers.

“(Pierce) is a tough driver,” Jameson said. “He's a strong driver. He drives like me … he comes to win. I love ... If he would have won and I'd ran second, I'd been happy with it, because I know he's won against every good guy out here this year and last year. But like I said, it's good to get a win.”