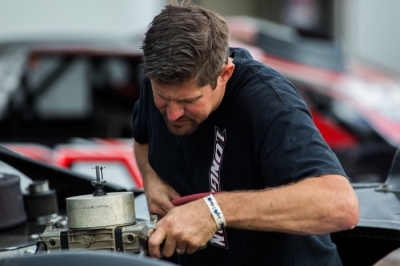 BARBERVILLE, Fla. (Feb. 21) — There was no dialing back the smile on Jason Fitzgerald’s face after Tuesday night’s 30-lap UMP DIRTcar-sanctioned feature at Volusia Speedway Park.

Perhaps a DIRTcar Nationals evening that included a heat-race victory and a ninth-place finish in the headliner wouldn’t thrill every driver, but for Middleburg, Fla.’s Fitzpatrick it was an outing to remember. | Complete Speedweeks coverage

“I mean, hell, it’s like I said, I’m making shows, so that’s just awesome to me,” Fitzgerald told DirtonDirt.com pit reporter Ben Shelton with unmistakable enthusiasm following the A-main. “These guys do it for a living and I raced like 15 times last year, so I’m pretty pumped up.”

Fitzgerald, 41, was extremely satisfied to log a top-10 finish against high-level competition so early into his new 2017 deal driving a Longhorn Race Car fielded by fellow Floridian James Simons of Southway Crane. The run comes in the wake of several encouraging Georgia-Florida Speedweeks performances, including a 10th-place finish in the Feb. 10 Lucas Oil Late Model Dirt Series event at Golden Isles Speedway near Brunswick, Ga., and an 11th-place finish in the Feb. 19 Lucas Oil show at Bubba Raceway Park in Ocala, Fla.

“This is the best Speedweeks by far I’ve ever had in Supers — by far,” said Fitzgerald, who kicked off his DIRTcar Nationals assault at Volusia with a 14th-place finish in Monday’s 30-lap UMP DIRTcar-sanctioned opener. “I think my car owner’s getting a little excited. I think he wants to start running more of it (Super Late Model events), which is cool to me, too.”

A former National Late Model Series and United Dirt Late Model Challenge Series champion, Fitzgerald owns and operates Fitz Factory Inc., a full-service motorsports business that this year has become the prime southern dealer of Longhorn Chassis. Hooking up with Simons is allowing him to expand his driving horizons and potentially enter more special Super Late Model events than any previous season in his career.

While Fitzgerald wasn’t able to parlay his sixth starting spot in Tuesday night’s headliner into a coveted top-five finish, he couldn’t complain about placing ninth.

“I mean, what else can I ask for?” he added, beaming as he spoke. “We don’t take it for granted. Tomorrow’s a new day and we could run dead last, but you know what? We’re all having fun. It could be a lot worse. We’ll try it again tomorrow if it don’t rain.”

Chad Hollenbeck of Kingsley, Pa., provided a highly personal explanation when asked what served as the catalyst for the solid runner-up heat-race finish Tuesday that put him into his first feature during Georgia-Florida Speedweeks 2017.

“I’ll tell ‘ya,” Hollenbeck related, “my wife (Sherry) and kids (Dylan, 14, and Delaney, 12, the youngest of the Hollenbecks’ four children) are flying out tomorrow morning, and I promised her I was getting this car in the feature tonight. So it was the pressure of having a great support team like that that’s with you, and wanting to do well for them, that pushed me. I just really wanted to do something good for them after the last week-and-a-half.

“It’s been a very rough week-and-a-half, but down here you have to remain persistent. If you are not persistent, you will not succeed. You can’t hit a home run if you don’t swing.”

But Hollenbeck, who is in only his seventh season of Super Late Model racing despite his age, came alive in his sixth try. He timed second-fastest in his qualifying group and closely tailed Heat 4 winner Tyler Erb of New Waverly, Texas, en route to a second-place finish that represented his first-ever heat-race qualification at Volusia since he began running Speedweeks events in 2011.

While he went on to slip from the 10th starting spot to a 17th-place finish in the feature, Hollenbeck wasn’t disappointed.

“I think we made two features here before tonight — one was on a provisional and one was through a consy,” Hollenbeck said. “We have never been as strong early in a heat race like we were tonight. We were definitely a lot stronger earlier tonight.

“We’re kind of green in being in these features of this caliber, though, so I tried the high line once and it didn’t really feel good … and when I saw Kyle Bronson kind of fenced it (on lap 16), I figured, ‘Well, maybe down low isn’t such a bad idea for tonight.’ Not that we’re afraid to run up there, but we were pretty pleased to be in the feature.

“It’s absolutely a privilege to be with these guys and racing with them,” he added. “Even though our performance in the feature wasn’t what we were looking for, we learned a lot, we continue to learn a lot, and it’s gonna make us better.”

“I’m so proud of him, I can’t stand it,” Stevens said while visiting Hollenbeck after the race in a golf cart. “He has come so far, and for him to have a night like tonight, it’s just great … and we were just one adjustment off to even have a better night.”

Just as Kyle Bronson’s hopes began to rise in Tuesday night’s 30-lap feature, a losing battle with the half-mile Volusia oval’s thick cushion snuffed them out.

“I was running that cushion, getting higher and higher and higher,” said Bronson, whose high-side charge from the 12th starting spot carried him to sixth place on lap 15. “My car was really, really good, and I was closing on those guys in front of me.

“But I folded the nose (of his XR1 Rocket car) down a couple laps before that and it started getting harder to turn, and finally when I went in the (third) corner (on lap 16) the nose just slammed into the ground. I was done after that. There was no steering from there.”

Bronson, 26, of Brandon, Fla., hit the outside wall and spun around, ending his hopes for his first top-five Dirt Late Model finish in the DIRTcar Nationals since he scored an upset victory in the 2014 event’s World of Outlaws Craftsman Late Model Series finale.

“It’s a shame,” said Bronson, who was credited with a 23rd-place finish for the second consecutive night. “I never had a car so fast in my life and can’t get the job done. It’s tough luck, but hopefully it changes around. We’ve got us a bad car so hopefully we’ll get us some wins here by the end of the week.”

Bronson reported that his car didn’t sustain as much damage as it appeared (“That nose was bent down and took most of the impact,” he said), but he still had plenty of bodywork repairs to make. It was the second time in a week that he was left with a significantly beatup car (he crashed in a Feb. 14 heat at East Bay), but he had no regrets about his aggressiveness.

“It’s been a tough Speedweeks, but that’s the way it goes sometimes,” Bronson said. “We’re running hard and these guys are tough. You’ve got to get every bit you can.

“I got to sixth there and all them guys were sitting there in front of me in the same corner, so you feel like you want to capitalize on that. I just hit the cushion and folded the nose down, but we’ll move on to tomorrow.”