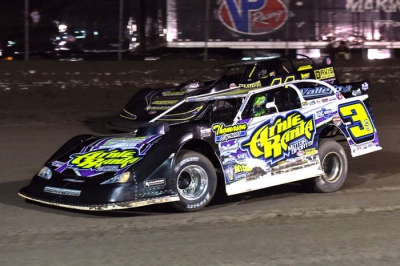 BARBERVILLE, Fla. (Feb. 20) — Brian Shirley of Chatham, Ill., looked strong and confident on his way to a runner-up finish in Monday’s 30-lap DIRTcar-sanctioned feature that kicked off the Dirt Late Model portion of the 46th annual DIRTcar Nationals at Volusia Speedway Park, but on the inside he was a swirl of conflicted emotions. | Complete Speedweeks coverage

With his life-long buddy, Kelly Kovski of Springfield, Ill., lying under doctors’ care in stable condition in a Daytona Beach, Fla., hospital after being injured Sunday at Volusia when a sprint car driven by Dale Blaney flipped over the turn-two catch fence and struck Kovski and two other bystanders, Shirley found it difficult to focus on his task at hand.

“It’s just one of them deals that I need to get it out of my head, but it’s just hard because he’s been like a brother to me,” Shirley said of Kovski. “We’re the exact same age (35 years old). We’ve known each other since we’ve been about 5 or 6 years old. I just hate to see what happened to him.”

Shirley was at the half-mile oval on Sunday evening as a spectator, taking in the World of Outlaws Craftsman Sprint Car and UMP modified doubleheader on the eve of move-in day for the Dirt Late Models. Seated in the homestretch grandstand, he saw Blaney’s car somersault off the racetrack and witnessed the frightening aftermath in which safety crews administered to the injured and ambulances and a helicopter arrived to transport them to Halifax Health Medical Center across the street from Daytona International Speedway.

But Shirley had no idea that one of the people whisked away from the scene was his pal Kovski, the manager of Hoosier Tire Midwest in Springfield, Ill., who competes in open-wheel modified and occasional ARCA stock car events and was at Volusia in his position as crew chief for the moonlighting modified effort of NASCAR Infinity Series driver and Illinois native Justin Allgaier.

“Somebody come over and told us that it a different (crew) guy with Allgaier, so I didn’t know any of that happened (to Kovski),” Shirley related 24 hours after the accident. “Then my buddy Jimmy called me at little bit later — he was with (Kovski) at the hospital — and said he was just letting me know that everything was OK. I was like, ‘What are you talking about?’ Then he told me Kelly was the one who got hit.”

The news shook Shirley, who was shocked to learn that someone so close to him was part of an incident that drew national media attention.

“We been friends forever,” Shirley said of Kovski, who has won multiple modified features in the Midwest over more than a decade of racing in the division, entered over two dozen ARCA events (he finished second in last year’s dirt race on the DuQuoin, Ill., mile) and did a stint behind the wheel of a Dirt Late Model. “We went to school together when we were younger, and there was a group of us who started racing together — actually, we started racing mods together.

“Shoot, he’s helped me my whole racing career,” he added. “He’s a good guy. He’s pretty smart and would do anything for anybody.”

Shirley went to Halifax hospital Monday and spent time with Kovski’s family and friends gathered there, including Kovski’s father. He learned the extent of Kovski’s injuries, which Kovski’s wife, Mandy, detailed Monday evening in a Facebook post: a collapsed lung due to broken ribs; several lower vertebra fractures; internal bleeding from a ruptured spleen that was surgically removed; and low blood pressure due to the loss of significant blood. (Kovski’s wife also reported that he is able to move all his extremities and, though he has been on a ventilator, “he was able to open his eyes a little bit, wink at us, squeeze our hands and mouth, ‘I love you.’ ”)

“I’m gonna go there in the morning (Tuesday), check on him, make sure he’s all right,” Shirley said of Kovski, who is the father of two young children. “But he’s a fighter, and he’ll fight through it. He’ll make the best of it and be back.”

Shirley, of course, would have loved to win Monday night’s feature at Volusia so he could dedicate it to Kovski. He had that on his mind when he mentioned Kovski in an emotional interview over the track’s PA system and the live DirtonDirt.com internet broadcast after his heat-race victory, but he fell short in that quest. After leading the race’s first 13 laps off the pole, Shirley was overtaken by eventual winner Chris Madden of Gray Court, S.C., and settled for a career-best Volusia finish of second in his Bob Cullen Racing-Arnie Ranta Motorsports machine.

“He flustered me there when he got by,” Shirley said of Madden. “I felt like before that caution (on lap 13) I had it under control and was pulling away from everybody. Then, to be honest with you, I just made the wrong move. I should’ve went high in (turns) one and two. I just rode the bottom too long, and Madden went around us. Just live and learn, I guess.”

With five more nights of racing left — including three World of Outlaws Craftsman Late Model Series events to close the week — Shirley will have more chances to win one for his friend.

“I’m going to try and win him one before we leave here.”

“We been friends forever. We went to school together when we were younger, and there was a group of us who started racing together — actually, we started racing mods together. ... Shoot, he’s helped me my whole racing career. He’s a good guy. He’s pretty smart and would do anything for anybody.”