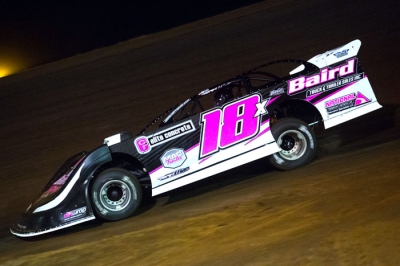 EASTABOGA, Ala. (Jan. 15) — It didn't take long for Michael Page to gel with his new race team. Of course, when you have a hands-on approach like Page is accustomed to, things should stay pretty routine anyway. | RaceWire

The 33-year-old Douglasville, Ga., driver debuted his team’s Sweet-Bloomquist Race Car in flawless fashion. He was the fastest qualifier, he won his heat race and he led every lap on the way to winning Sunday's 26th annual Ice Bowl at Talladega (Ala.) Short Track.

Paired with long-time Dirt Late Model backer and car owner Troy Baird for the first time, Page delivered in his first race for the owner he’d never met before being offered the ride.

“Troy called me a couple months ago. I’d never met him,” said Page. “He asked if I’d be interested in driving for him and I told him I’d give it a shot.”

Baird, a South Carolina native who owns a trucking business among other enterprises, has fielded cars driven in the past by Jonathan Davenport, Brandon Overton, Ross Bailes and other standout drivers.

Page took delivery of Baird’s two Sweet-Bloomquist cars and immediately went to work prepping for the Ice Bowl. Going through the car he planned to run at Talladega, Page began making adjustments to his liking. Like many drivers, Page was eager to put his own touches on the car, something he said he’s been used to doing throughout his career.

“I did it all on my own and I’m pretty proud of that,” said Page. “We didn’t have ride heights, nothing. It was my own shock setup, my own springs. I told Troy that I always done my own thing and that’s what I wanted to do. I told him if that didn’t work, then we could call somebody or maybe ask Bloomquist.

“That’s the first time I’ve ever seen (a Bloomquist car) actually. I think it looks like a Warrior,” Page added. “I’ve had Warriors in the past … and the back end looks like a Rayburn.”

Page’s approach may be unique, but not to him. He said he’s learned to race by the “feel” of the car, an old-school approach he credited learning from his dad. By the way, he finished a solid second at Talladega in the Sportsman Late Model feature piloting a ’98 GRT owned by his father.

After starting the 2016 season as a hired gun, by midseason Page said he found himself back in his own 2005 GRT — the same car he used to win track titles at Dixie and Rome speedways in 2011 and 2012.

And, admittedly, due to the skyrocketing costs, he found himself on the verge of exiting the sport he loves. But thanks to a friend — and the acquisition of a like-knew Black Diamond Chassis — he stayed the course and went on to enjoy an outstanding season.

“With the Black Diamond last year, I didn’t have any (notes) on it either. I did my own thing and we won almost every race we raced it last year,” Page said. “It makes you feel like you’re doing something right, doing it your own way and not somebody else’s way. Like I told somebody, if you’re doing everything everybody else’s way, then you’re gonna be right there with them, not any better than them.”

After his Ice Bowl victory, Page was ready to turn his focus to the team’s other Sweet-Bloomquist car. With a 428 c.i. Andy Durham engine under the hood, it should be significantly different than his winning ride at TST.

Page said he plans to finish preparing the car so they can go to Golden Isles Speedway in Brunswick, Ga., and test. Also on the horizon is a new tow rig, which they should have in a couple of weeks.

While there’s no permanent plan or schedule set in place for the new pairing, Page did say he thought Baird would be able to attend more races this season than he has when fielding cars for others in the past. And Page hopes to make the most of it, too.

“We’re going to travel. It may be two times a month; it may be five times,” Page said. “This (opportunity) means everything. My dad and family’s always raced. That’s all I’ve ever known. It’s what you want to do, but you really can’t (on your own). I race to win and to have a good time. But if you’re not winning, you’re not really having a good time.”

He had a good time at the Ice Bowl.

“It makes you feel like you’re doing something right, doing it your own way and not somebody else’s way. Like I told somebody, if you’re doing everything everybody else’s way, then you’re gonna be right there with them, not any better than them.”