With another new car, Marlar aims for Arizona 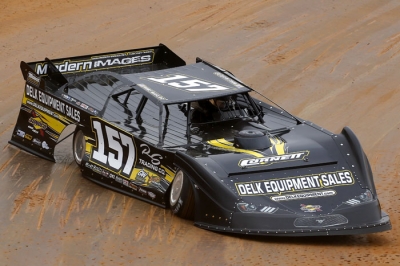 SEYMOUR, Tenn. (Dec. 31) — After capturing the 2016 Lucas Oil Late Model Knoxville Nationals behind the wheel of a bright yellow Capital Race Car, Mike Marlar of Winfield, Tenn., is back in black. A Black Diamond Chassis, that is. | RaceWire

Planning a trip to the upcoming Keyser Manufacturing Wild West Shootout at Arizona Speedway near Phoenix, the 38-year-old driver debuted the new car at Saturday’s seventh annual Hangover 40 at 411 Motor Speedway. Charging from his third-place starting spot to challenge race leader Ray Cook of Brasstown, N.C., through the final laps, Marlar closed the night with a runner-up finish.

“Ray and I, man we had an awesome race and it was fun getting to race with him,” Marlar said after the race. “He and I actually raced every lap almost because he started fourth and I started third and we was door-to-door there trying to get around the guy running second for quite a while. The whole race we raced each other and it was really fun. He made all the right moves and never made no slipups, and he got me.”

After making a brief switch to a Longhorn Chassis in August, Marlar climbed back behind the wheel of his familiar Capital car to pick up his first career crown jewel victory at Knoxville. Shortly after the big win, the Tennessee driver and crew stepped away from racing scene to assist in the cleanup of Hurricane Matthew, a storm that struck the East Coast in early October. It was during that time that his car owner began making plans to add a Black Diamond car to the team’s stable.

“We went off this fall and did some disaster work with Mark Dotson, one of the guys we race with that everybody probably knows,” Marlar said. “We went off and worked with him and didn't race much. Ronnie Delk, our car owner, had been talking about how he'd wanted a Black Diamond even before we borrowed our Capital.

“So he'd done some trading with Steve Francis and got a (Black Diamond) car and bought another car. Now we've got them and we're going to try to do the best for them no matter what we have. Seems to be an awesome car and I think we can run good in it.”

Marlar, a six-time Lucas Oil Series winner and former Battle of the Bluegrass Series champion, has had racing success in a number of different chassis brands. Coming off a solid run at 411, he’s eager to see what he can do with the Black Diamond.

“You know, they’ve got a really capable car,” Marlar said. “Everybody's cars are all different, all of them's good at some things and other cars aren't so good at some things. One thing I do say about the Black Diamond is that it seems to be pretty versatile across all the conditions and where I really travel a lot, hopefully that works out for us.”

While Marlar is frequently questioned about his recent chassis changes, he said he is grateful to have a car owner that’s willing to go the extra mile to give the team what it needs to win races.

“It ain’t always the popular thing to change chassis, but I'm going to look at the positive side and be glad I have a car owner that wants me to win every race I go to,” Marlar said. "I've got to give him a lot of credit because he ain’t afraid to do anything and he's a guy that pays his way and he wants to do what he wants to do and can't blame him for that.

“He obviously thinks that we can do good in it and we've come out of the gate pretty good in it, so I think we can do real well. He sacrifices a lot to give us good engines and good cars and keeps me good help. I appreciate everything he does and I'm glad that I've got a guy that's willing to step up. If he thinks I can win more races with something else, he'll do it and he'll take a chance on it and see what happens.”

Posting a runner-up finish at 411, Marlar will now look ahead to the 11th annual Wild West Shootout, as the Ronnie Delk-owned race team makes the trip to the desert for the first time.

“We took off in early October, so we didn't get to race any last fall,” Marlar said. “We're just chomping at the bit and we miss racing and we want to get back after it here. Luckily I have good help in my business that enables me to leave for a couple weeks. We're going to be able to take off and go out there and we're just going to have fun and try to win some races. We’re going to have a good time and get to see some sights and hopefully win some races.”

“It ain’t always the popular thing to change chassis, but I'm going to look at the positive side and be glad I have a car owner that wants me to win every race I go to ... he ain’t afraid to do anything and he's a guy that pays his way and he wants to do what he wants to do and can't blame him for that.”