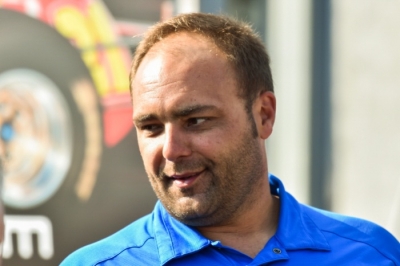 Donny Schatz is not a one-trick pony in the World of Outlaws Craftsman Sprint Car Series. The seven-time sprint car series champion also occasionally challenges himself in the Late Model division, and when he first grabbed the reigns of the 2,300-pound iron horse, it was an eye-opener.

“(Late Model racing) is like the horse you get on that kicked you off,” said the 39-year-old Schatz of Fargo, N.D. “You never let the horse win. You’re going to get on it, you’re going to kick that horse and show it you can ride it.”

Schatz plans to compete in both sprints and Late Models during Oct. 27-29’s Bad Boy Off Road World Finals at the Dirt Track at Charlotte in Concord, N.C. Schatz has won a third of WoO's sprint races since 2014, and he believes his sprint car success improves after hopping out of a Late Model.

The most recent example came July 7 when Schatz finished 12th in WoO Late Model action at Hamilton County Speedway in Webster City, Iowa, then two days later won his 13th sprint event of the season at Cedar Lake Speedway in New Richmond, Wis. In 2015, after finishing on the podium at River Cities (N.D.) Speedway on July 10, Schatz won his 20th WoO sprint car race at Cedar Lake the following day.

“A lot of people helped me – (Rocket Chassis co-founder) Mark Richards and (three-time WoO Late Model champion) Darrell Lanigan,” Schatz said. “They both are ones who helped me get into it, and get a running start too. So, that always helps.”

Without using wing adjustments as he’s accustomed to in sprints, Schatz’s has had to learn Late Model racing’s nuances like shock setups in adjusting to a race car with a different weight displacement as well as more frequent contact in the full-bodied cars.

“Even the tires are really big and it’s just a whole different dynamic than what you’re expecting to feel, and in all honesty I don’t know what I’m supposed to be feeling,” Schatz said. “I’m trying to make good laps as good as I can or what feels fast based off the people around me or what feels good to me. When you don’t know what to expect, it’s a different mindset. You keep trying things. After being in this for 20 years, hopefully you know what’s good and what’s not good.”

Schatz has enjoyed dabbling in Late Models at his home track of River Cities Speedway in Grand Forks, N.D., and beyond.

The Late Model “was a great fit that allowed me to still be able to race around home during the week and have a little fun during the off-nights with the Outlaws,” Schatz said. “It also gave me a different car to tinker with.”

Would he ever consider a more serious run in the Late Model division?

“I think in the back of my mind, someday I’d like to travel with Late Model, but my first and foremost priority and love is right here. I love racing sprint cars,” he said. ”That opportunity may come someday, but I’m not going to manufacture that opportunity. I’m going to have fun while I can, and I’m enjoying the hell out of myself here. I’m going to enjoy it here, and enjoy it there when I can.”