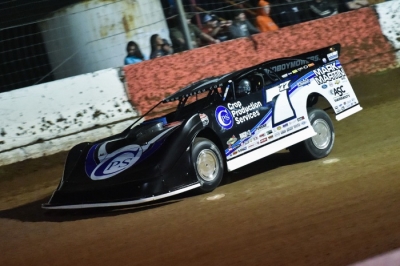 LOCUST GROVE, Ark. (April 16) — A fourth-place finish in Saturday night’s Bad Boy 98 at Batesville Motor Speedway showed how far Jared Landers has come as a Dirt Late Model driver over the past year — and why he’s on the cusp of becoming a regular winner on the Lucas Oil Late Model Dirt Series. | RaceWire

Racing at a 3/8-mile oval that sits just miles from his Batesville, Ark., home, Landers added another strong performance to what is inarguably the best start of his six-year career chasing the national tour. The path he took to the edge of a podium result added even more luster to an outing that could have only been better if he had won the race’s $20,000 top prize.

Landers, who turns 34 on May 1, started fourth and was seemingly cruising along in the top five when a flat right-rear tire — one of the many suffered by drivers throughout the caution-plagued feature co-sanctioned by the Lucas Oil Series and Comp Cams Super Dirt Series — forced him to pit on lap 48. He returned and cooly made his way back to fourth in the final rundown, demonstrating a level of confidence, resilience and technical strategy that has truly blossomed since he climbed in Sweet-Bloomquist cars fielded by his father Lance at the start of the 2015 season to become a de facto teammate of Bad Boy 98 victor Scott Bloomquist.

“I thought our night was gonna be over when we had that flat there,” Landers told DirtonDirt.com after the race. “I guess I’m lucky I had that flat that early so I could charge back up through there.”

Of course, Landers didn’t simply toss his machine around the challenging Batesville layout with wild abandon to salvage a noteworthy finish. He used his head and his foot to pick his way forward and avoid falling victim to another deflated tire.

“I kind of rode a little bit and took advantage of some of them cars on restarts because I had fresh tires and I could tell I had a little bit better traction,” said Landers, whose first major Dirt Late Model triumph came at Batesville in the 2010 Topless 100. “But once they got singled out (late in the race) it was hard to make ground up because the track kind of rubbered up down the backstretch and (turns) three and four.”

Eschewing the temptation to press harder in an effort to gain positions, Landers found that taking a calmer, more subdued approach on restarts was his key to success.

“So on some of them restarts I made up a lot of ground in (turns) one and two,” he added. “Shoot, I was wanting to see more (restarts) … I kind of got leveled out after everyone got their own clear air and I just settled in for a fourth-place finish.”

The fourth-place run marked Landers’s third consecutive top-five finish on the Lucas Oil Series — following a third April 1 at Boyd’s Speedway in Ringgold, Ga., and a second April 2 at East Alabama Motor Speedway in Phenix City — and seventh overall in 14 tour events this season. He hasn’t won yet, but he has three runner-up finishes (including one in a non-Lucas race March 25 at Illinois’s La Salle Speedway) and is obliterating his pace of Lucas Oil top-fives from 2015 when he had just three through mid-April en route to a total of 11 for the season.

Landers also appears ready to better his career-best Lucas Oil Series points finish of fifth in his rookie 2011 campaign. He heads to the circuit’s April 22-23 doubleheader at Sharon Speedway in Hartford, Ohio, and Hagerstown (Md.) Speedway sitting third in the standings, 220 points behind leader Jonathan Davenport of Blairsville, Ga., and 90 in arrears of his mentor Bloomquist.

Scott Bloomquist kept seeing caution flags fly for cars slowing with popped tires as he paced the field in the Bad Boy 98, but he had an inkling that the problems weren’t the result of an abrasive track surface. He surmised that other factors were at work, which prompted him to stick with a cool, calculated low-groove approach.

“I don’t know if the tire wear was as bad (as some thought),” said Bloomquist, who joined Jimmy Owens of Newport, Tenn., as the only drivers to win both the Bad Boy 98 and Topless 100 at Batesville. “It’s just the rocks on the racetrack where they put some dirt on the racetrack last week. The rocks around here are really sharp and I think a lot of guys were running over those rocks if they got up high. That’s one of the reasons we elected to stay lower on the racetrack, run the middle and stay on the bottom.

The 52-year-old Bloomquist fought a stumbling carburetor that he said would upset his car exiting turn two, but he experienced no other real problems in leading the race from lap six to the checkered flag. He asserted that the only time he pursuers shortened the gap on him was when he reached slower traffic.

“You get to the lapped cars and you lose so much air on your car and you’re a little bit looser,” Bloomquist said. “I think that the closer (the challenges would) have gotten to me, they wouldn’t have been much better. It was just track position.”

Bloomquist was very pleased to nab the win — not only to cash a $20,000 check and reach victory lane at Batesville for the first time since the 2011 Topless 100, but also because the triumph came at a track in the home state of two of his main sponsors, Crop Production Services and Mark Martin Automotive.

“Last year (in the Topless 100) I think me and Jared were on the front row and something happened to both of us,” Bloomquist said, “so it was nice (to win in Arkansas for his financial backers).”

Jonathan Davenport wasn’t ready to concede defeat as he chased Scott Bloomquist from second place during the second half of the Bad Boy 98. A deflating right-rear tire that ultimately went flat on lap 91 after he slipped to third place, however, made his hopes for pulling out his tour-leading seventh victory in 14 events this season a moot point.

“I ran over something,” Davenport said when asked what caused his tire to lose its air.

While Davenport, 32, doubted his chances of outrunning Bloomquist for the lead in clear track, he thought he could have made something happen if the pacesetter was hampered by slower cars.

“I was just waiting for my opportunity in lapped traffic,” Davenport said. “I was going to make it interesting, but (Bloomquist) was very good in clean air so that would’ve been my only shot.”

Davenport’s 11th-place finish represented just the third time in 27 overall starts this season that he failed to finish among the top five and the first such instance since Georgia-Florida Speedweeks action at East Bay Raceway Park in Gibsonton, Fla. He chalked it up to bad fortune — which, incidentally, he experienced on his way to the track and again after leaving it.

En route to Batesville, Davenport was slowed by a flat tire on the T-shirt trailer he was hauling down the road. Then on Sunday he had wheel bearing burn out and weld the bearing races to the spindle; he had to find a place with a hub assembly and buy a grinder to cut off the hub nut and the bearing races before continuing down the highway to Indianapolis, where he was headed to trade his T-shirt trailer for a larger one (gotta carry more merchandise, right?)

After picking up the new trailer, Davenport plans to spend the week on the road before this weekend’s Lucas Oil events at Sharon and Hagerstown.

“I am going to hang with my buddy Mason (Zeigler in Chalk Hill, Pa.),” Davenport quipped, referring to his fellow racer and Longhorn Chassis campaigner.

NASCAR Camping World Truck Series regular Tyler Reddick’s failed to crack the Bad Boy 98 feature lineup in his first Dirt Late Model start in 19 months, but it wasn’t for a lack of trying.

The 20-year-old racer asserted that the Haughton, La.-based Childress Racing team “brought two really fast cars (to Batesville) for myself and (primary driver) Garrett Alberson.” Some mechanical trouble at the start of the weekend, however, forced Reddick into a deep hole that he wasn’t quite able to climb out of to make the feature lineup.

“I was getting the hang of the car good during qualifying,” said Reddick, who wondered if he would be rusty following his long layoff since last running at Dirt Late Model at the 2014 World 100. “We unfortunately suffered an electrical issue that came on during qualifying (on Friday night) and we had no time to fix it for the heat race. We tried to run the heat and the car was misfiring, so we had to start last in the B-Main (on Saturday night).”

Reddick made a valiant charge in the 15-lap last-chance event, climbing up to fourth but running out of time to gain one more spot and transfer to the headliner.

“I really thought we had a car that would have been great in the feature,” Reddick reported. “We just needed one more break in the B-main to have made it to the race. I felt like I got back to being comfortable in the car as we ran the B-main.”

Reddick, whose next NASCAR Truck race is May 6 at Kansas Speedway, said he is planning to enter other selected Dirt Late Model events this season with Childress Racing. No dates have been firmed up, however.

With his second Lucas Oil Series victory of 2016, Bloomquist joined Davenport (six) and Josh Richards of Shinnston, W.Va. (four) as repeat winners on the tour through 14 events. The only other drivers to reach victory lane so far in 2016 are Mason Zeigler and Chris Madden of Gray Court, S.C. … While Don O’Neal was racing to a third-place finish, his 15-year-old son Hudson drove to a $1,000 Crate Late Model triumph Saturday night at Brownstown (Ind.) Speedway. … Hometown veteran and former Topless 100 winner Wendell Wallace started from the pole position and led laps 1-5 of the Bad Boy 98, but he gradually faded from contention before slowing with a flat tire on lap 54. He finished 19th. … Jeremy Payne of Springfield, Mo., started fifth and was still holding down the position on lap 57 when an overheating engine forced him to retire. … Billy Moyer Jr. of Batesville, Ark., relinquished seventh place to a flat right-front tire at the race’s halfway mark and finished 21st. … Jimmy Owens had a rough march to a 12th-place finish, pitting multiple times and surviving a scrape with another car that sent him spinning off turn four on lap 60. … Shannon Babb of Moweaqua, Ill., climbed from the 22nd starting spot 10th place before mechanical trouble forced him pitside after 52 circuits. The 20th-place finish continued his slow start to 2016; he placed fourth in the March 26 Spring Thaw at La Salle but hasn’t finished better than 17th in his other four appearances to date. … Brandon Overton of Evans, Ga., entered the Bad Boy 98 after hauling out early to visit the nearby Billy Moyer Racing shop for some technical assistance with his Billy Moyer Victory Race Cars. But despite being scheduled to start from the outside pole in a Saturday B-main, the 25-year-old World of Outlaws Craftsman Late Model Series regular decided to withdraw from competition and make an 11-hour overnight haul to Saturday’s Ultimate Series-sanctioned Jack Starrette Memorial at Modoc (S.C.) Speedway. Overton ended up finishing third at one of the tracks he considers his home turf. … WoO follower Morgan Bagley of Tyler, Texas, missed the Bad Boy 98 feature after a flat tire knocked him out of second place in a B-main with seven laps remaining.