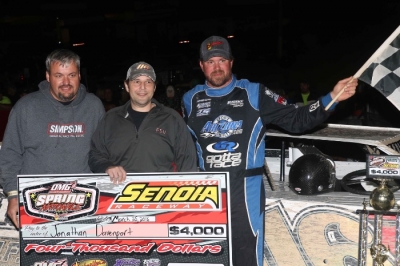 Randy Weaver was the highest-profile crew chief in the Dirt Late Model world Friday at Senoia (Ga.) Raceway — and as much as the veteran standout from Crossville, Tenn., loves driving, he was fine with watching his Chip Stone-owned No. 116 from the sidelines.

Of course, sitting out was made easier by the fact that Weaver turned control of his Longhorn Chassis over to arguably the hottest driver in the sport today. It was reigning Lucas Oil Late Model Dirt Series champion Jonathan Davenport of Blairsville, Ga., who made a guest appearance in the machine and, not surprisingly, gave Weaver and Co. all they could have asked for, providing not only some valuable feedback about the vehicle but also a $4,000 victory in the evening’s 40-lap Old Man’s Garage Spring Nationals feature.

Weaver, 46, relished the opportunity to team up with the 32-year-old Davenport, who normally campaigns the K&L Rumley Racing Longhorn cars. The arrangement was, after all, a long time in the making.

“I’m not done racing by any means, but we’ve talked for three or four years about him driving our car," Weaver said after Friday night’s action. “He’s got eight or 10 open dates on his schedule, and we’re working on a lot of the same stuff (Weaver and Stone’s business, Outlaw Racing Southeast, distributes Longhorn chassis), so it made sense to finally work together.

“It’s always good to have another driver’s outlook on your cars, and sometimes it’s good just to stand and watch your own car perform on the racetrack to see how it’s acting.”

Davenport was happy to oblige his buddy Weaver.

“We’ve been talking back-and-forth for a while about me driving his car when my racing schedule allows and I gave him my open dates,” Davenport said. “We just worked it out from there.”

And Davenport put on a show for Weaver, pulling off some of his typical breathtaking maneuvers on his way to outdueling Chris Madden of Gray Court, S.C., to assume command for good on lap 26. The driver known as Superman rolled to his ninth overall triumph of the season sitting in the cockpit of a car that was literally almost identical to Weaver’s regular office.

Davenport noted that piloting Weaver’s mount around the extremely fast 3/8-mile oval gave him an appreciation for the Volunteer State driver’s strength.

“We pretty much left the car the same way Randy had it, without making any changes for driver comfort,” Davenport said. “About the only thing we did was put a smaller steering wheel on it.

“But I’m gonna tell you what — he’s a man driving that thing,” he added during his victory lane interview. “He’s got a different rack-and-pinion from what I’m used to running. That’s the first time I’ve had to arm-pump in I can’t tell you how many years … man, I feel like my left hand’s gonna fall off.”

Davenport, who would have turned Stone’s car back over to Weaver if Saturday night’s $6,000-to-win Spring Nationals event hadn’t been postponed by rain to April 23, enjoyed his cameo in the No. 116 as much as Weaver did. The race gave J.D. a chance to race at a track that he hadn’t visited since he was a fresh-faced teenager.

“I think it’s been 15 years since I’ve been here,” Davenport said of the Senoia facility. “I won my last trip here in a Legends car when it was asphalt. I’ve got a lot of friends here — we hung out with some of them last night (after practice) — and it’s great to win in my home state again.” — Brian McLeod and staff reports

Making just his sixth career Super Late Model start, Milliken set fast time, started from the pole position in the 40-lap feature and led the way until the final circuit. That’s when Franklin found a way to grab the top spot, dashing Milliken’s hopes for a monumental $5,000 triumph.

“Willie was awesome,” Franklin said, praising Milliken’s effort. “When I seen five (laps) to go, I knew it was time to put the dice down there. I didn’t know if I could pass him. He bobbled just a little bit and that's all it took. Willie opened the door the lap before, and the last lap he gave me just enough.”

Beginning his first full season driving a Clements-powered Longhorn Race Car for M.J. Price Racing, Milliken didn’t hang his head after his heartbreaking defeat. He settled for second place, 0.788 of a second behind Franklin.

“The right-rear (tire) started giving up on me a little bit and getting through traffic I was just trying to hold on to it the last six, seven laps,” said Milliken, who has done most of his racing in the Limited Late Model division. “When I was trying to get into the corner I started having to whoa up so much and then the car started pushing the rear end. It got bad the last three or four laps.

“It sucks pretty bad (to fall short), but the good Lord blessed me with a good team, a good crew, a good family and can come back here and do it again. I think we’ve got a real good team, real good motor … I think we're going to be real tough when the Lucas Oil Series and the World of Outlaws come (to Fayetteville — WoO on April 30, Lucas Oil on July 7). I think we're going to win some races here shortly.”

“The racetrack was probably the best I've ever seen it,” said Franklin, a three-time Carolina Clash champion who recorded his series-record 41st career victory. “The racetrack was just super. I won the race so they're gonna say that’s why I said that, but I’m telling you, that’s the best I’ve seen this racetrack in a long time.

“They had a good crowd here tonight (as well). It was raining and I saw they were still piling in and I thought, Man, they must want to see a race bad.”

Franklin left Fayetteville unsure of his plans for the upcoming weekend. He has been contemplating hitting the road with his Carl Sherwood-owned team to chase the WoO tour for the first time in his career, but he’s not yet committed to making the circuit’s first post-Speedweeks events April 1-2 at Farmer City (Ill.) Raceway.

“I had a guy that was going to work for me (as a crewman) that got a job at Duke Power so that sort of put a kink in everything, so we're up in the air,” said Franklin, who drove a Longhorn to the checkered flag at Fayetteville but noted that he has two new Billy Moyer Victory Race Cars being prepared at his shop. “We'll know at the end of the week.” — Thomas Pope and staff reports

After tallying a dozen victories during a breakthrough 2015 campaign, Chris Ferguson of Mount Holly, N.C., has found it difficult to nab his first checkered flag this season.

The 26-year-old driver was good-but-not-good-enough again on Saturday night at Fayetteville, finishing third in the Carolina Clash feature. He stayed positive after the event, chalking up his outing as a sign that first-place runs are coming soon.

“My car wasn’t really that good, so to run third and not have a good car, I can’t complain,” Ferguson said. “It’s been a trying year … another third-place finish, but this week we had a third-place car. Sometimes I tried to hard and I about gave third away.”

Ferguson, who also placed third in March visits to Cherokee Speedway in Gaffney, S.C., and Lancaster (S.C.) Speedway, did have a front-row seat for the dramatic ending of Fayetteville’s A-Main.

“Heck of a move by Rambo,” Ferguson said. “I about wrecked going into (turn) one watching them. I was like, ‘This is about to get good.’”

Ferguson also had high praise for the evening’s action.

“Hat’s off to FMS because they put up a good show,” Ferguson said. “We’re getting out of here at a decent time and we can wake up and go to church tomorrow (on Easter Sunday) and not feel too bad.

“The track was surprisingly smooth … the track had two grooves, but the bottom was so much faster. I've been here a bunch of times over the years and I’ve seen it really good, and tonight was one of those nights. If you can pass somebody without having to change your line or you can change your line and pass somebody, that’s what makes a good track to me.” — Thomas Pope and staff reports

Cory Hedgecock of Loudon, Tenn., won the 2016 Chevrolet Performance Super Late Model Series season opener on Saturday night at 411 Motor Speedway in Seymour, Tenn., but he was very gracious in his postrace interview because he knew the victory was a gift.

Hedgecock assumed the lead on lap 44 of the 50-lap race after dominant race leader Ryan King of Seymour, Tenn., was eliminated from the race in a hard crash that was not of his own making.  Despite his race car being destroyed, King walked away uninjured after the crash.

“I knew from the drop of the green flag that I was racing for second because Ryan had us covered tonight,” Hedgecock said. “He made a better tire choice than we did, and when he was in a clean track condition he was gone and we had nothing for him.  I hated he got taken out like he did in lapped traffic. We were gaining on him and I was looking forward to an opportunity to race him at the end.”

King led the first 43 laps of the race. He was working in heavy lapped traffic and he tried to go to the inside of Ross White of Knoxville, Tenn., coming off the fourth turn. White came down on the race leader and hit the right front of King’s car, sending King spinning to the infield where he backed into a large utility tire that was placed to protect the track scales and the track infield personnel. The impact pushed the left-rear four-bar suspension mounts into the back of King’s seat.

“I was in a hurry to get through the lapped traffic because I saw Cory one time and knew I had to go,” King said. “I was in the wrong place at the wrong time, but that’s just a part of racing. We’ll be back for the next race because I’m OK and we can fix and replace these race cars. This was one of last Stinger cars built at J.T. Kerr Racing Equipment. I’ve got to thank Travis Holbert for not only a fast car, but a safe car.” — Roby Helm