Alberson trying to get over major-race hump 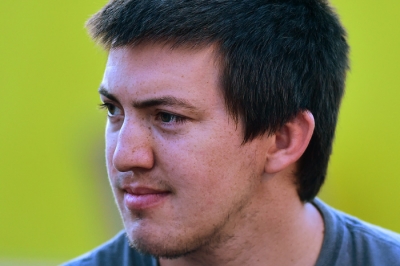 It’s been about a year an a half since Las Cruces, N.M., native Garrett Alberson moved to Louisiana to further develop his Dirt Late Model career. At the start of the 2015 season, Alberson’s goals appeared within grasp when he was tapped to pilot one of the Haughton, La.-based Childress Racing team’s Black Diamond Chassis.

The 26-year-old Alberson has since traveled to a lengthy list of far-flung racetracks, including Eldora Speedway in Rossburg, Ohio, for the first time. But this weekend, he’ll return to the relative familiarity of Whynot Motorsports Park in Meridian, Miss., eyeing the $15,000 Coors Light Fall Classic prize.

“It’s been real good so far, just a lot of learning,” Alberson said. “Learning the new cars and learning the new team. We’ve just been going to a lot of tracks that we haven’t been to before. I haven’t been out here in this area but about a year and a half in general, so we’re just now getting to some tracks for the second and third time. We’re still just kind of learning. But every time we show up to a track for a second or third time, it seems like we get better.”

Competing close to his home base on the Mississippi State Championship Challenge Series and the Comp Cams Super Dirt Series, Alberson has notched multiple runner-up and third-place finishes on the season. But the Louisiana transplant stamped his mark on the Dirt Late Model world back in June, qualifying for Eldora’s $100,000-to-win Dream XXI in his first ever visit to the famed oval.

“The Dream was awesome,” Alberson said. “That was my first time ever going to Eldora and I didn’t know what to expect. I had never been on a track like that. And honestly, it took a couple of days to get used to the speed and how you run up there on the wall that fast. That was one of those epic things that you can’t hardly imagine being able to do, getting to start that race like that.

“It was weird. I haven’t really raced on tracks like that in general … that big and that fast. For it to be Eldora, you grew up as a young racer kid always hearing about it. It’s just like Daytona. I expected to just go and learn and have something to take back the next time we went and it just kind of fell our way. It was an awesome experience. Just kind of humbling to be there.”

Fast forward to August, Alberson made the trip to Batesville Motor Speedway in Locust Grove, Ark., for the $40,000-to-win Comp Cams Topless 100. The Childress Racing driver was among heat race winners and ran in the top-10 before settling for an 11th-place finish.

“That was my first Lucas Oil heat race win,” Alberson said. “So that was pretty cool. My whole family was there; they came up just to watch that race. And then it all just went really cool. I almost got a top-10 in the feature. My goal for the year was to get a top-10 in a crown jewel and we got close. Didn’t quite get it done yet, but at least we were right there at it.”

It’s been a busy October for Alberson, who started the month at Greenville (Miss.) Speedway’s Gumbo Nationals, making the trip to Magnolia Motor Speedway in Columbus, Miss., the following weekend for the Magnolia State Cotton Pickin’ 100. Alberson was among Gumbo Nationals frontrunners, challenging race winner Timothy Culp of West Monroe, La., for the lead before slipping out of contention to finish 10th. He ran 11th in the $20,000-to-win event at Magnolia.

“We’ve been right there close to the front a lot here lately,” Alberson said. “The finishes haven’t been showing it, but we’ve definitely got speed. It’s just me gaining experience. These tracks all change so much and have such weird characteristics, each one of them do. The guys that are from the area just know them so well and they catch me off guard. I’ll be going along thinking I know what’s going on and they’ll just change. The guys around me know what’s going on and I don’t. It’s just experience.”

Alberson, a former El Paso (Texas) Speedway Park track champion who won 14 Late Model races in both 2012 and ’13, admits that the move to Louisiana has been a bit of an adjustment. With a whole new pool of competition, he’s had to step up his racing game.

“Well, the climate here’s definitely different,” Alberson joked. “The main thing is the racing is just so competitive. At home, everywhere we went, the top-five was pretty stout and you had to race hard with that top-five. Here, just a Comp Cams race, no matter where you go, you’ve got to race hard just to get in the show. There’s so many guys that can win a race out here. The competition level is excellent.

“It gets you down a little bit when you’re used to winning a lot like I was back at home. But it steps your whole game up. It forces you to be that much more precise and that much more aware of everything. It’s a little difficult just because I was hoping to win something during the year. We got close a couple times. But it just makes it that more special when you do run good because of how tough it is out here.”

But this weekend, Alberson will return to a more familiar racetrack as he enters Whynot’s Coors Light Fall Classic. Alberson ran third in the MSCCS event at the speedway at the start of the season, finishing 11th in the series September visit after an early battle with race winner Bub McCool of Vicksburg, Miss.

“I really like it,” Alberson said of Whynot. “When they’ve got the track right it’s real wide and you can put a bunch of cars in tight spots and have some really good racing. I’m looking forward to getting back there. Last time we were there we qualified fast time and were running second to Bub (McCool) there for a little while. I’m excited to go there and get all the good guys over there and see what we’ve got for them.”

With Childress Racing teammate Chris Simpson of Oxford, Iowa, joining him this weekend, Alberson his aiming for another strong performance. And to continue to gain experience that he can carry over into the upcoming season.

“I just hope to keep what speed and what momentum we have,” Alberson said. “Hopefully we just keep that pace up. We’ve had a decent balance on the car and everyone’s been getting along pretty good. I’ve got a good team and everyone works hard. We’ll be racing with Chris Simpson this weekend and I’ve had fun racing with Chris. We’ll have some fun trying to learn from him a little bit.”