Mitchell aims to get streak going again at TMS 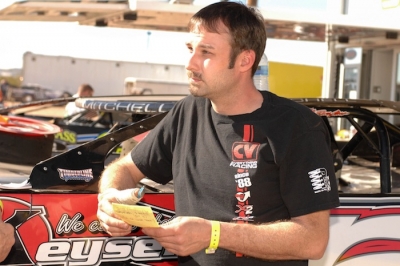 Jon Mitchell is looking for his first TMS victory. (photofinishphotos.com)

Mitchell, the reigning SUPR champion from Texarkana, Texas, has four victories in the Louisiana-based tour’s first five points events and will look to continue his impressive start at this weekend’s Portacool Texas World Dirt Track Championship at the Texas Motor Speedway Dirt Track near Fort Worth.

Mitchell started his streak with a March 28 victory at Baton Rouge Speedway in Baker, La., and followed by a doubleheader sweep in Texas at Battleground Speedway in Highlands, and finally a victory at Timberline Speedway in Corley, Texas.

Mitchell’s winning streak ended April 11 with a second-place finish to Timothy Culp at I-30 Speedway in Little Rock, Ark., but the strong start has given him a 124-point lead in the championship standings heading into Saturday’s Late Model portion of the Portacool Texas World Dirt Track Championship. The two-day event also will feature racing in the modified and limited modified divisions.

For Mitchell, the team’s success can be traced to the time when he is not actually on the track but rather the long hours he and his crew put into preparing the car every week.

“It’s hard work in the shop,” Mitchell said. “We bust our butts here in the shop, trying to get everything prepared the best we can. We’ve got a pretty good motor program and car program right now, so it seems like everything is jelling for us.”

A win at the Texas Motor Speedway Dirt Track would be a first for Mitchell. The event, a coveted prize among regional drivers, has eluded Mitchell and will serve as motivation this weekend.

“It would be big,” Mitchell said.  “The best we’ve run there is third, so I would definitely like to get that (winner’s) cowboy hat for sure.”

Erb began racing in 2011 as a 14-year-old in hobby stocks and a year later he took over the driver duties of his father’s Super Late Model. It took him just four starts to land his first win for the father-son team. Last year, he recorded his first SUPR victory at Lone Star Speedway in Kilgore, Texas.

A victory among series veterans this weekend could bolster his rise in the series.

“That would be the biggest win ever,” Erb said. “That’s one of the biggest races of the year and a victory would be awesome.”

The Portacool Texas World Dirt Track Championship opens at 6:45 p.m. Friday with heats for the modified and limited modified divisions. Features for those divisions and SUPR Late Models are set for Saturday when racing begins at 6 p.m.

Tickets for the Portacool Texas World Dirt Track Championship tickets are available through www.texasmotorspeedway.com, by calling the track at (817) 215-8500 or at participating O’Reilly Auto Parts stores in Dallas-Fort Worth (discounted $5). General admission is $10 Friday and $20 Saturday with children 12-and-under half priced. Parking is free.