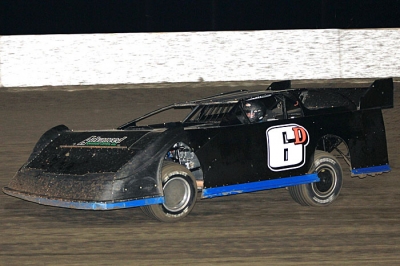 A 38-year-old central Louisiana native, Duke enters the tour's season-opening March 20-21 doubleheader at Baton Rouge Raceway in Baker, La., hot off one of his career-best years in 2014. He recorded 10 top-10 finishes on the SUPR circuit last season (his best: fifth at Lone Star Speedway in Kilgore, Tex., during the Memorial Day weekend), propelling him to the SUPR Rookie of the Year honors over Chad Comer of Warren, Texas. | SUPR schedule

Virtually raised at the racetrack by his father, Richard Duke, and uncle, Bobby Litton, the younger Duke began his driving career in 2002 in the open-wheel modified division. He would stay in the modified class for 10 years before venturing out to the Dirt Late Model ranks in 2012.

Duke gained much knowledge and experience by not only racing modifieds that long but also spending several years crewing for his cousin, four-time SUPR champion Rob Litton of Alexandria, La.

"My dad and uncle raced all through the ‘70s and ‘80s,” Duke said, “and once I was old enough I went with them every chance I had. When Rob started racing I was old enough to really start helping out with the cars some. As Rob progressed and started traveling more in following SUPR, I went just about everywhere with him.

“We didn't race very much the first few years (starting in '02) because I was still helping Rob full time on the SUPR Series tour. After Rob won the SUPR Championship in 2004, I felt like we had accomplished our goal and I kind of started focusing more on my modified deal."

The determination and promise began to ring true almost immediately for Duke as he won the modified portion of the Jambalaya 100 at Pike County Speedway in Magnolia, Miss., at the end of the 2004 season. “(Winning) that fired me up even more to focus on our modified program,” he said.

Fast forward to the spring of 2012, when Duke found himself with an opportunity to climb inside a Dirt Late Model thanks to Litton and Lionel Crooks of Chatham, La. Duke drove the team's extra car during that stint and produced a podium finish early on at I-30 Speedway in Little Rock, Ark., placing third behind winner Bud Mullins and runner-up Kevin Sitton.

“I can't really say which is harder to drive between the Late Models and the modifieds — they are both different in their own way,” Duke said. “I believe about the third night out in the car we ran third at a SUPR race at Little Rock and, right after that, a local guy had a new Rocket Chassis for sale that Rob had built."

The racing bug had struck again, and Duke ended up buying a Late Model formerly owned by Joey Couvillion of Pineville, La. Duke raced a limited schedule in 2012 and 2013 before attempting the full SUPR circuit last season.

Duke has been running the Dirt Late Model mostly from his own pocketbook, making it a tough haul. He missed last season's SUPR opener on March 8 at Texas Motor Speedway, but raced in 14 of the tour’s 15 events in 2014.

And after last season's crusade, Duke enters his second full-time SUPR campaign with a solid foundation to build on. Of the 32 total SUPR races he has entered since May 2012, Duke, who runs a Rocket by Litton machine powered by a Wall 2 Wall Performance engine, has only missed one feature main event.

Tyler Townsend of Longview, Texas, is hoping to be the latest racer from the open-wheel modified ranks to tackle the SUPR tour.

Following in the tire tracks of such racers as Morgan Bagley, Timothy Culp and Shane Hebert, the 22-year old Townsend brings a standout modified resume with him to the Dirt Late Model division in 2015. Known as “T-Bone,” Townsend is expected to throw his hat in the ring for SUPR's Rookie of the Year honors this season while piloting his MasterSbilt Chassis/PTS Racing Engine No. 12T.

Townsend’s Team 12 crew — consisting of his dad, Phil, along with Kevin Beaty of Longview, Texas, and Rick Epperson of Shelbyville, Tenn. — acquired their virtually brand new Late Model from a Kentucky competitor who used it once in Crate Late Model competition.

"It is one race old, but we stripped it down to the bare frame and rebuilt the whole thing," Townsend said. “We have been racing modifieds for such a long time, we just decided to try something new.”

The young gun from the Lone Star State began racing karts (on dirt) at age 5 and stayed in the class for seven years before moving to the Mod-Lites for three seasons. At 14, Townsend jumped to the pavement and competed in the Late Model division until age 16. His stay on pavement was relatively brief, however, because his team felt the task of traveling endless miles to race on the hard surface — due to a dearth of tracks in his area — and keeping the car stationed in Tennessee was too daunting of a task.

So Townsend switched his focused to dirt and the open-wheel modified class, and, at age 18, he was crowned champion and Rookie of the Year in the ArkLaTex Winged Modified Series. He also ran two other open-wheel classes that season, frequenting the limited modified and full-modified divisions.

Townsend captured Boothill Speedway’s Louisiana State Dirt Track Championship in the open-wheel modified ranks in 2010. The next season he edged modified hotshoe Peyton Taylor of Batesville, Ark., for the championship of Longhorn Speedweeks, which was part of the Comp Cams Southern Modified Promotions Series.

Now, as Townsend closes in on his one-year wedding anniversary with his wife Shelbie, he’s upping the ante with his next career move: climbing inside the cockpit of a Dirt Late Model.

“My biggest challenge will probably be, just being the 'new guy in the series' and learning a new kind of race car,” Townsend said. “My accomplishment is to be competitive and win some races. We will just have to see how it goes.”

One driver can potentially collect $5,000 at this weekend’s season-opening SUPR twin bill at Baton Route Raceway.

Friday’s opening night action will include the non-points Ollie’s Car Wash SUPR Shootout with $2,000 going to the driver with the best combined finishes in a pair of 10-lap dashes.

A unique format will greet drivers on opening night with the top 10 drivers in 2014 SUPR points guaranteed the chance to compete. Other drivers will run a 20-lap qualifier to fill out the balance of 18 starters. Drawing for starting spots, the 18 drivers will run the first of two 10-lap segments, then line up in reverse order for the second 10-lap dash; the driver with the best combined finishes earns $2,000, with all other entrants receiving $100.

SUPR’s April 4 event at Battleground Speedway in Highlands, Texas, will be available via live pay-per-view at RaceonTexas.com. The price is $15. … Heading into 2015, the winningest current regular on the SUPR circuit is Rob Litton of Alexandria, La. (fifth overall with 31 victories). … Ronny Adams of Diana, Texas, fourth on the all-time list after a victory last season at Battleground, isn’t likely to race much after long-time car owner Pat Wright sold out last fall. … Former NASCAR driver Ken Schrader is expected to compete in the Late Model division at Baton Rouge, piloting a Donald Watson-owned Barry Wright Race Car.