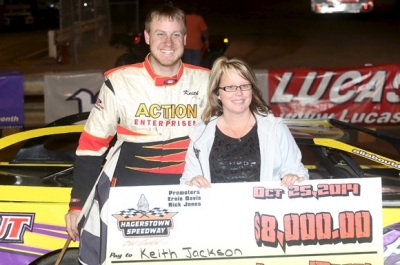 “To get six wins in 18 starts in this region, we’ll take that. That’s really, really good,” Jackson said at Hagerstown. “The Winchester 200 weekend was our biggest weekend and we won $8,500 there, but it was two separate shows. So this is our biggest win right here.”

Like many drivers, Jackson has made limited starts this season because of lack of funding and limited help. But he’s made the most of those starts by winning one out of every three.

“I work a full-time job, anywhere from 40 to 60 hours a week,” Jackson said. “It’s tough for a working guy to run a full-time schedule. Plus I work shift work some weekends and that can really mess up my racing, too.”

The optimistic Jackson, however, has seen the reduced schedule as a positive on his racing operation. He admits the extra time off — and an assist from Dale Beitler, a long-time successful car owner who has stepped back from full-time racing — has allowed his team to be better focused and better prepared for each event than they have in the past.

“Dale’s helped us out a ton this year. Preparation in these cars means everything and if you don’t have everything right at the shop, you’re not going to be good at the track,” he said. “A few weeks ago we went to Winchester and thrashed around all night Friday night putting a new rear end in (the car). Saturday night, we go out and throw a driveshaft. So preparation means everything to us. And to actually race a little less, that really helps us out.”

Jackson’s Leggett-powered MasterSbilt by Huey, owned by Bruce Kane, was certainly in tune Saturday night at Hagerstown. The fast qualifier started on the pole and led all 40 laps, cruising to an easy win over Rick Eckert and 19th-starting Gregg Satterlee.

“This track, it’s so crucial to get out front. With the lapped traffic, if they didn’t give me a complete lane, I had a hard time getting by them. To qualify up front here, that means everything. I think if Rick (Eckert) had gotten out front, we wouldn’t have gotten around him,” Jackson admitted. “That bottom had a little moisture, and on one of the restarts, I kinda missed it just a little and he (Eckert) was able to hang with us for a little bit.”

When asked his possibilities for 2015, Jackson acknowledged he’s looking into a few things.

Although he was the first retiree at Ernie D’s Fall Bash, Kyle Hardy of Stephens City, Va., has been consistently solid after getting a late start in 2014. Driving one of the last cars from the MasterSbilt by Huey fleet, he has four victories on the year.

“We had another chassis, but it just didn’t really do what we wanted it to do,” Hardy said. “So we talked and got this one. This is my family’s stuff, so we can’t just really go out and get a car anytime we want, you know? It took a while get this car and do it right.”

With three victories at Hagerstown and one at Winchester under his belt, Hardy plans to wrap up his season at The Dirt Track at Charlotte for the World of Outlaws Late Model Series World Finals. And he’s already looking toward 2015.

“There might be some different plans,” Hardy said. “I might be driving for someone else. It’d be nothing but travel, and that’s what I want to do.”

Admitting that the Winchester-Hagerstown competition is “some of the toughest around,” the second-generation driver pines for the opportunity to pit himself again a stronger contingent of drivers.

“I mean, I want to race in this area but I also want to get out more, learn more, and be more successful on the road and run with different guys who do this for a living."

Brian Tavenner of Winchester, Tenn., posted a seventh-place finish in the finale at Hagerstown, where he finished sixth in the track’s Super Late Model points. Among Tavenner’s best runs of the second came in a runner-up finish in Dog Hollow Speedway’s Thunder Dog 50 and third-place finish in Hagerstown’s Speedway Hayes Memorial.

In his ninth Super Late Model season, Tavenner made the jump from pure stocks into the elite stock-car division “We went straight to the wolves,” Tavenner joked about the transition.

Owning all of the equipment himself, Tavenner takes pride in the strides his team has made this season. Aside from being a semi-regular at Hagerstown, Tavenner has also enter events at Lernerville, Dog Hollow, and Winchester among other tracks.

“It’s been a real consistent year for sure,” Tavenner said.  “We got a new car (Rocket) this year. Between that and the help we’ve got … my guys work on the car so I all I’ve got to do is drive it. There’s not as much on my shoulders to try to fit everything into my schedule and work on everything.”