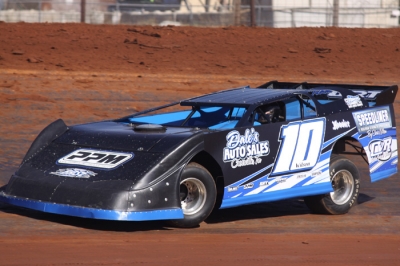 Chris Wilson tunes up before his $3,000 victory. (circlesville.com)

Wilson inherited the lead after tangle between leader Chad Winkles of Falkville, Ala., and Riley Hickman of Ooltewah, Tenn., then held off Eric Cooley of Fulton, Miss., over the final 10 circuits at the quarter-mile oval.

Polesitter Lamar Scoggins of Cleveland, Tenn., led early in the race, but mechanical problems forced him out and he became the second retiree in the 24-car field. Winkles inherited the lead from Scoggins.