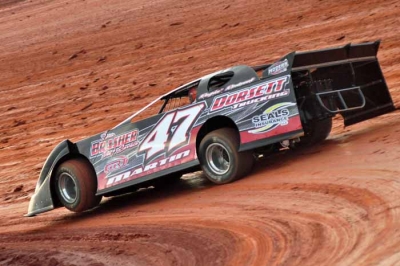 EASTABOGA, Ala. (Jan. 5) — Throughout much of his career, a third-place finish in Talladega Short Track’s Ice Bowl would’ve be considered a major success for veteran racer Ross Martin. But after breaking through for his first Ice Bowl victory last season, settling for a third-place finish in Sunday’s 50-lap Ice Bowl feature was a bit of a letdown for the Talladega, Ala., driver.

“I guess it’s disappointing after you’ve won the thing,” said Martin, who drove a CT 525-powered car in the unsanctioned special event. “But with this caliber of cars, to finish third and carry the car home in one piece, we’ll take it and go on with it. I’d rather won it, but this was good.” | Thomas wins Ice Bowl

Going into Sunday’s race, Martin had plenty of reason to hope for another Ice Bowl trophy. A heat race win during Saturday’s prelims earned him the third starting spot— the same position from which he started last year’s Ice Bowl feature. And while the track surface was taking on its usual Ice Bowl appearance before the race, the groove appeared just wide enough to allow for at least some passing, much like it did in 2013.

Unfortunately for Martin, trouble in lapped traffic and an incorrect tire choice kept him from claiming his second Ice Bowl victory.

“We were on a different tire than they were and it just wasn’t what we needed,” said Martin, who at times fell far behind leaders William Thomas and Eric Cooley in traffic. “Last year, we had a lot of cautions, and we kinda worked the track in. I think this year, caution-free, I think everybody stayed in the bottom and locked it down. There just wasn’t gonna be much passing.”

While this year’s Ice Bowl fell short of last year’s performance, Martin still enters the regular season with plenty of confidence from his strong finish. He’ll need that confidence as he chases a championship on the Chevrolet Performance Super Late Model Series. Martin, who will be joined by son Adam in following the second-year series for CT 525-powered Late Models, is looking forward to competing with Sunday’s Ice Bowl winner and defending series champion William Thomas.

“I’m really looking forward to hopefully outrunning William Thomas once or twice in that series,” Martin joked. “He’s pretty tough to beat. But if me and my son can finish in the top five in points and maybe win a race here and there, that’d be a pretty good year for us.”

Cook in a Bloomquist car?

After he landed the MasterSbilt Race Cars house car ride over the offseason, likely the last thing many fans attending the Ice Bowl expected to see was Ray Cook driving a different chassis brand. But Cook, the longtime MasterSbilt driver from Brasstown, N.C., did just that in driving an all-black No. 53 Bloomquist Race Car for car owner Tommy Pope.

Those fans shouldn’t get too used to seeing Cook in the Scott Bloomquist-designed chassis. It was a one-off ride in which Pope, a longtime sponsor of Talladega veteran Danny Peoples, asked Cook to drive the car.

It took some time for Cook to get the Bloomquist car adjusted to his liking, but by Sunday’s feature he appeared to have it figured out. He was one of the few drivers to make a big move forward in advancing from 14th to seventh before the higher groove he was running gave way to the dominant bottom line midway through the 50-lapper.

“Actually, it don’t drive a lot different. These race cars are all alike. They’re either loose or they’re tight,” Cook said. “We got it dialed in OK, and we were pretty good right through the middle. I don’t think the middle went away, but the bottom just got faster toward the end and that made it harder. I was shooting for a top five. We didn’t quite get there, but that’s not bad.”

The Ice Bowl weekend was a chance for Cook and Pope to get some experience working together. Pope has a MasterSbilt car on order, which Cook will drive on occasion, and also plans to join Cook and the MasterSbilt team at many Lucas Oil Late Model Dirt Series events this season.

Lavon Sparks usually enjoys racing with his friend and fellow home-state driver Ross Martin, but as he rode behind Martin in the fourth spot for much of Sunday’s feature, Sparks was wishing he were battling a driver he didn’t mind running more aggressively.

“I had a pretty good shot on Ross a few times, but me and him’s been friends for about 15 years,” Sparks said. “I kinda wish we wasn’t now cause I believe I was a little quicker than he was. But he was protecting the bottom, and he’s a real clean racer and a real good friend, so we just kinda rode around there and got a fourth out of it.”

While he may have been frustrated with his buddy for holding him up in Sunday’s race, he does have to thank him for talking him into running a CT 525 engine for the first time. The Ice Bowl was a test run with the new engine for Sparks. He liked the engine so much he plans to purchase a second one and chase the Chevy Performance Series this season.

“Ross is the one that talked me into it, and it’s probably the smoothest motor I’ve ever ran” Sparks said. “We’re gonna race with them a bunch on that 525 series, so this is definitely a great way to get things rolling for that.”