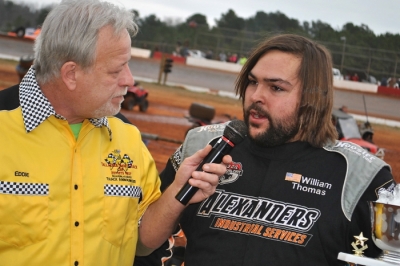 William Thomas talks about his final-lap pass at Talladega. (DirtonDirt.com)

The second-starting Thomas chased Cooley the entire distance of the unsanctioned race, making multiple low-side challenges as the two leaders ran through heavy traffic for much of the 50-lapper. Cooley, whose car was hampered by significant damage suffered in a lap-38 tangle with a lapped car, withstood each of Thomas challenges but couldn’t keep his ill-handling car in the preferred lower line on the final circuit.

Cooley pushed on both ends of the track during his final trip around the high-banked oval, allowing Thomas to close to his back bumper on the back straightaway before another push in turn four left Thomas enough room to edge down the homestretch.

“It was good racing there, but I wasn’t gonna get by him if he stayed in the bottom,” said Thomas, who became the second straight home-state driver to claim the Ice Bowl trophy. “We were right there on him pretty much the whole race and in lapped traffic we could stay right there with him. He just went in there and shoved. It was a racing mistake, and I just capitalized on it.”

The dramatic victory continued Thomas’ momentum from a successful 2013 season that saw him claim four victories and the championship on the inaugural campaign for the Chevrolet Performance Super Late Model Series for cars using CT 525 engines. Thomas, whose victory on Sunday came in the same car and engine combination he used on the Chevy Performance Series, also backed up his season-ending victory in Swainsboro (Ga.) Raceway’s $20,000-to-win Turkey 100 for Crate Late Models.

“This is a great accomplishment for us here to come here and win the Ice Bowl,” said Thomas, who plans to chase Rookie of the Year honors on the National Dirt Racing League this season. “To win this race our first weekend out after winning our last race at Swainsboro, everything’s going good right now, and we’ve got some good momentum. Hopefully we can keep rolling with it.”

Cooley of Fulton, Miss., settled for second after leading the race’s first 49 laps. Ross Martin of Talladega, Ala., and Lavon Sparks of Phenix City, Ala., both finished where the started in crossing the finish line third and fourth respectively, while Todd Morrow of East Ridge, Tenn., advanced from the eighth starting spot to round out the top five finishers.

With slower traffic blocking the track’s bottom groove, Cooley and Thomas raced nose to tail for much of the distance. Cooley inched away from Thomas each time the two leaders cleared a string a lapped cars, but Thomas was again applying heavy pressure when Cooley had trouble lapping 10th-running Tim Roszell of Coldwater, Ala., around the lap-35 mark.

Roszell finally left enough room for Cooley to pull even in turn four on lap 38, but Roszwell slammed the door on the front straightaway, sending both his and Cooley’s car spinning down the track. Cooley, who ended up hitting the inside wall before his car stopped sliding just beyond the flagstand, was giving his position back while Roszell was charged with the caution.

Although he was able to continue running and even slightly pulled away from Thomas after the restart, Cooley began to struggle to keep his car on the low side of the track as the race entered its closing portions. A couple of bobbles in the final five laps allowed Thomas to pull within striking distance before Cooley’s final-lap pushes opened the door for Thomas to claim the victory.

“I was fighting it ever since I got in that mess with the lapped car. I kept pushing and having to let out halfway down the front straightaway to get turned back to left,” said Cooley, who recorded a career-best Ice Bowl finish with his runner-up effort. “It just wasn’t meant to be our day, I guess.

“I know it happens and that ain’t the first time something like that’s happened to somebody leading a race and probably ain’t the last, but that don’t make it feel any better. It’s just disappointing after how good we were all weekend.”