Happy New Year for Hedgecock at 411 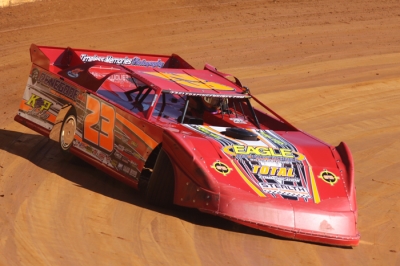 Cory Hedgecock gets up to speed Jan. 1 at 411. (circlesville.com)

Hedgecock survived first-lap contact with fellow front-row starter Jason Manley, then used the high groove to fend off mid-race challenges from runner-up Jensen Ford for a $1,500 payday in the Limited Late Model event.

“We got lucky by qualifying decent,” Hedgecock said. “I’m not sure what the Manley deal was all about. I was just trying to hold my groove as much as he was holding his. We were just lucky again tonight and got another one to start the year off good.”

“I always just think momentum is going to be the ticket,” Hedgecock added, explaining his decision to stick with the high groove against Ford. “I was struggling coming off of (turn) two because it was slick. I knew somebody was down there because my dad was giving me hand signals but I think I finally just started to pull back away. We struggled a couple of times through one and two but it all worked out in the end.”

Rusty Ballenger finished third behind Hedgecock and Ford while Josh Henry and Ross White rounded out the top five.

Hedgecock, who won the 2013 finale at the Mitch and Tanya McCarter-owned track, led the field through turns one and two at the outset of the 35-lapper, but he and Manley made contact on the backstretch. Hedgecock held onto the front spot while Manley fell back to fourth as Henry and Ford chased the leader.

During a lap-four caution for Josh Driskill's spin, Manley pulled alongside Hedgecock to show his displeasure over the first-lap contact.

On the fifth lap, the race’s second caution flag waved when Manley had his car tagged by another machine in turn one, setting off a series of events that resulted in Manley spinning in turn three. Having been hit by William Overby’s car after coming to rest, Manley climbed from the damaged racer and walked away in disgust.

Following the race’s final yellow flag on lap 12, Hedgecock received his only real challenge of the night when Ford attempted to make the lower line work around the track that typically tends to favor the upper groove. At the same time, Henry, White, Ballenger and Jason Cardwell staged a four-car battle for position just behind the lead duo. Eventually, Hedgecock was able to pull away for the victory.