National 100 remains a crown jewel of the South 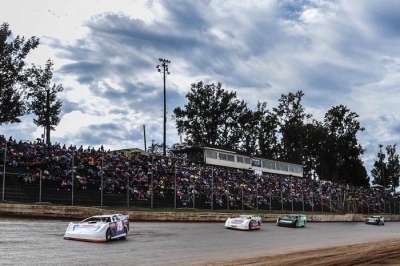 When Jimmy Thomas launched the event in 1975, just four years after Earl Baltes held the first World 100 at Eldora Speedway and six years before Carl Short hosted the inaugural Dirt Track World Championship at Pennsboro Speedway, it quickly became the South’s crown jewel event, attracting drivers from all over the country to Phenix City, Ala., each November. | Race history | National 100 pay-per-view

“It used to be considered one of the crown jewel races back then,” Smith recalled the late-season unsanctioned special event that will run for the 39th time this weekend. “Over time they got so many more big-paying races that it kinda got in the wash. But it’s been around almost as long as the World 100 or the Dirt Track World Championship, so it might not mean as much to some drivers as it used to, but it’s still big to a lot of us drivers in the South.”

Like many other Late Model events, the National 100 has suffered from an increasingly busy schedule and a struggling economy in slipping into its current role as more of a regional special. And without a large number of Super Late Model teams in the area around the track, the race has struggled with car counts, drawing as low as 31 cars in 2011 and 35 last season.

But Beverly Thomas, the daughter of Jimmy Thomas who now operates East Alabama along with her brother Billy, is doing her best to re-establish the National 100 as a major Late Model event. She understands the obstacles she faces in that task.

“I think it really boils down to the cost factor,” Thomas said. “It cost those guys so much to come down now, where in years past, expenses were different and it was a lot more affordable for teams to travel for races. And there’s so many big races. Years ago, if drivers wanted to run for big money, they had to do a lot of traveling. Now it’s a lot different.”

Despite the drop in car count and the decline in attendance from northern drivers, the National 100 remains a major event not only for Southern-based Super Late Model teams but also for the regions fans and lower-division teams. The race continues to draw large weekend crowds and with a total of nine divisions competing for extra-money purses, the event typically draws more than 300 cars overall.

Even in the Super Late Model division, the National 100 still attracts plenty of Southern-based national-touring drivers to go along with a stout field of regional competitors.

“We still get quite a few big-name drivers and a lot of drivers that people in our area want to see race,” Thomas said. “When you’ve got drivers like Scott Bloomquist and Chris Madden and Dale McDowell and Jonathan Davenport, those are guys the fans definitely want to see race here. Sure, we’re missing a few drivers, but fans still love seeing those guys race.”

Indeed, the event still draws its share of big names with the top five finishers in each of the past two years being made up of national touring competitors. But there’s still room for improvement and the potential for the National 100 to reclaim its former glory. Thomas and the rest of the East Alabama staff have made attempts to do just that through format changes and schedule adjustments in recent seasons.

After tinkering with the format last season, the National 100 has been moved up on the calendar this year. The track gave up its traditional date of the first weekend in November in 2010, moving back a weekend to accommodate the World of Outlaws World Finals at the Dirt Track at Charlotte. As a WoO regular, Smith believes being after the World Finals hurt the National 100’s car count.

“The name World Finals really says it all,” Smith said. “For a lot of people, it is their final. They leave there and they pack it up for the year. With the National 100 being the week before, I think it really changes people’s mindset about it and makes it a race they’ll go to.”

This year, the National 100 will take advantage of Charlotte’s move to Nov. 7-9 to run ahead of the World Finals for the first time. Thomas hopes the date switch will prove beneficial. Early signs are positive with Thomas reporting increased interest from drivers in the weeks leading up to the event. Her early estimates have the car count climbing back above 40 cars for the first time since 2010. WoO regular and two-time National 100 Rick Eckert of York, Pa., is among the drivers returning to the event this weekend.

“I would like to go every year,” said Eckert, whose stretch of four straight top-three finishes at the National 100 included back-to-back victories in 2004-‘05. “But you’re at the World Finals for three or four days and the banquet is after that. You just kinda get raced out and you have to get your help home a lot of times.

“It pays $25,000, so it’s definitely one of the bigger races that guys like me should be going to. It just hasn’t worked out where we could go the last few years, but I’m really excited to get back down there.”

With the return of drivers like Eckert and others who have skipped the National 100 in recent years after a busy weekend in Charlotte, Thomas sees this year’s National 100 shaping up to be one of the bigger weekends for the event in recent memory.

“We’re looking at probably 40 cars or more. Being in an area that doesn’t have a lot of Super Late Models regularly, for us to get that, we’re happy with it,” Thomas said “Also, it’s quality race cars that we have every year and we’re expecting it to be even better. With the quality of cars here, you know it’s gonna be a good race for the fans. They know they’re gonna get to see really good racing.”

Along with the optimism for a strong turnout this weekend, there’s also plenty of enthusiasm for the event’s future. As one of his home region’s top events, Smith hopes to see the National 100 return to the status it enjoyed for much of its past.

“It’s a race that I think could keep gaining strength,” Smith said. “It’s paid good money for a long, long time. They do a really good job, and they’ll keep making changes to make it better and keep up with the times. In my mind, it could definitely be a major event again.”