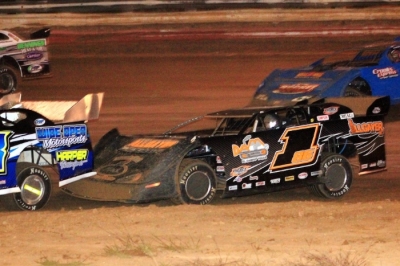 CHATHAM, La. (Oct. 26) — Part of a three-victory night at Chatham Raceway, Shane Hebert of Lafayette, La., earned $4,000 Saturday by capturing the Super Late Model portion of the Spooky 50. Hebert’s triumph in the full-fender division was sandwiched by modified and limited modified victories. | Slideshow

Starting 12th, Hebert used the high groove to grab the lead from outside front-row starter Jon Mitchell of Texarkana, Texas, with 14 laps remaining.

“The car was pretty good. I knew we was throwing all that stuff on the top, and I figured sooner or later it was going to pack in. The first half of the race, I wanted to try it really, really bad, but I knew I just needed to bide my time. I knew some cautions would come out,” Hebert told announcer Zach Clark in victory lane. “Once I seen it packed down, I went for it. And that’s all it took. We held it wide open and it stuck, so I knew I was good to go after that.”

Mitchell held on to finish second with Jody Prince of Sibley, La., in third. Allen Tippen of Minden, La., and 10th-starting Rob Litton of Alexandria, La., rounded out the top five finishers. Polesitter Tyler Erb of Magnolia, Texas, led the first half of the race, but mechanical problems forced him out.

Notes: Hebert’s Jeff Allgayer-owned No. 186 Pierce Race Car is powered by a Mullins Racing Engine and sponsored by D-A-M Services, Allgayer Inc., Victoria Mack, NAPA and Express Trucking. … Hebert sold that car that carried him to five P&W Sales SUPR victories in 2013, but his backup car was successful at Chatham. “This is the first time I’ve ever got in it, and it drives just like the other one,” Hebert said. … The two-day event drew 161 race cars, including 29 Late Models.