Watkins, Weeks triumph at King of the Carolinas 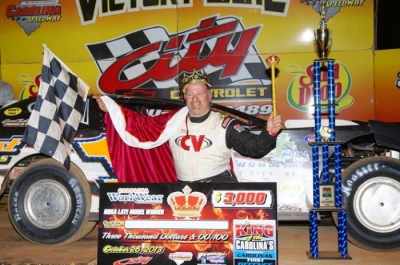 In Sunday's Limited feature, Watkins rallied from 18th after being part of an early caution for a victory over track champion Jay Sessoms of Stanley, N.C. Watkins was 18th on the fifth lap and roared back to regain the lead on lap 17. Ross Bailes of Clover, S.C., finished third while Johnathan Edwards of Lake Wylie, S.C., and Doug Sanders of McAdenville, N.C., rounded out the top five.

In Saturday's Crate feature, Weeks kept Bailes in check, edging away at the finish with clean racetrack provided by a late caution. Bailes finished second with Matt Long of Concord, N.C., Corey Gordon of Kenly, N.C., and hometown driver Greg Barker rounding out the top five.