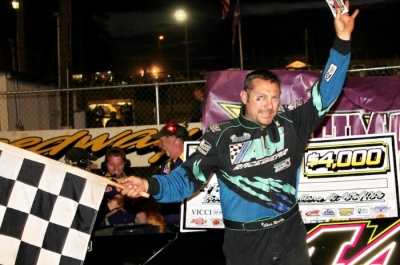 TOCCOA, Ga. (Oct. 27) — In the week leading up to the Shriner’s Benefit race at Toccoa Speedway, stick-and-ball fans were focused on the World Series. In his own way Sunday night, Chris Madden, of Gaffney, S.C., knocked another one out of the park to collect $4,000. | Slideshow

“We’ve just been really good, and in contention to win just about every race we have entered since the summer,” Madden said. “We definitely got some things figured out and are really looking forward to next weekend at (the National 100 at East Alabama Motor Speedway in) Phenix City and then going to Charlotte (for the World of Outlaws World Finals). We are hoping we can keep knocking ‘em down.”

Hometown favorite and series points leader Casey Roberts started outside the front row and stayed within striking distance early in the race, but a tangle with a lapped car near halfway blew out his right rear tire. Roberts pitted for a new tire, but any chance at getting back to the front was cut shot when he was collected by a spinning car, ending his race.

Late in the race, Smith, who had survived a first-lap melee that damaged the nose of his car, tried a higher line at the 5/16-mile oval but couldn’t draw within five lengths of Madden.

“We got into that first lap wreck with Chris Ferguson; he spun out and we got into him,” Smith said. “It knocked the braces loose on the right front nose and they were getting under the right front tire. So I was pushing violently the whole race. I was having to drive around it the whole time. I had to make sure I was turned and that’s why I really couldn’t ever get a charge on him.

“That was why I was running high and everyone else was running low. I wanted to be able to carry that momentum on top and not get the car sideways because of that strap,” Smith added. “So if I had not had that problem there, I do think I had something for (Madden) but he is a tough customer anytime. But you never can tell, he might have been idling and just rolling along.”

“They’ve got years and years of experience, but I could hang with them for a little bit,” Mitchell said. “I think we made the wrong tire choice on the right rear tonight. But we have had an up-and-down year and I am proud of the run we made here tonight.”

Madden notched his third Ultimate Series victory of the season and 11th overall, capping a weekend that saw him notch a runner-up finish to Mike Marlar the previous night in Southern All Star Series action at Smoky Mountain Speedway in Maryville, Tenn.

“We let one get away from us last night. We went a little bit too hard with our tire combination and let Mikey beat us,” Madden said. “But it was a strong run for us and with the win tonight, it was a good weekend.”

Notes: Madden’s Bloomquist Race Car is powered by a Clements Racing Engine with sponsorship from Century Plastics, Hamrick’s of Gaffney, Cushman Paint and Body, Henderson Amusements, Hoosier, and Ohlins Shocks. … He dedicated the victory to his oldest son Parker, whose 16th birthday was Sunday. … A dozen drivers completed 40 laps and 14 were running at the finish. … Drivers who missed the feature lineup: J.R. Headen, Bubba Russell, Daniel Fowler and Aaron Ridley. ... The Ultimate Series closes the season Nov. 15-16 with a $10,000 to win event at County Line Raceway in Elm City, N.C.