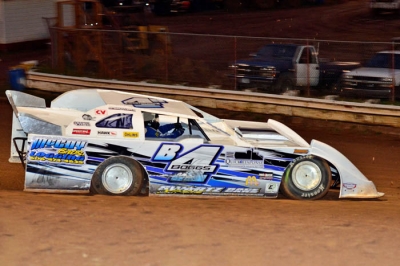 Boggs took the checkers ahead of runner-up Walker Arthur of Forest, Va., and Tim Dohm of Cross Lanes, W.Va., but Dohm lost third place when his car was too light at the scales. | Slideshow | Accident injures McGuire

Chris Combs of Isom, Ky., was moved up to third with Dustin Linville of Bryantsville, Ky., and Chris Wilson of Louisa, Ky., rounding out the top five finishers.

The night’s racing was marred by fast qualifier’s Josh McGuire’s heat-race accident that saw his No. 41 rollover several times by itself entering turn one. McGuire, who lowered the track record in time trials, was taken to a nearby hospital and then airlifted to a Huntington, W.Va., with a fractured C-1 vertabrae, according to his wife Tracy.

Notes: Boggs drives a Swartz Race Car with sponsorship from The Weld Shop and Trick Shot Penetrating Lubricant. … Seven drivers were under the previous track record of 12.82. … Besides Josh McGuire, drivers who didn’t start the main event: Cody Hunley, Tony Ramey and Joe King. … The event concludes the season at the eastern Kentucky oval.