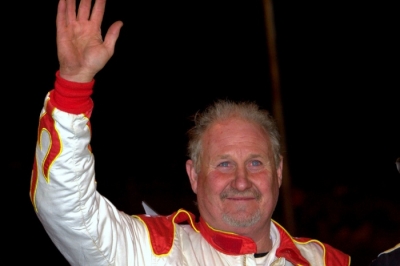 Kent Robinson of Bloomington, Ind., had a straightaway lead heading for the white flag, but a broken axle ended his run, setting up a final dash to the finish with Michael Chilton of Salvisa, Ky., leading Mike Jewell of Scottsburg, Ind., back to the restart.

But when Jewell tried to overtake Chilton between turns one and two on the white-flag lap, Conley took advantage of the contact and grabbed control, racing to an unsanctioned victory in the season-ender at the undersized half-mile oval.

Jewell settled for second while Eric Wells of Hazard, Ky., was third despite pitting to replace a flat tire on lap 37. Track champ Tim Prince of Heltonville, Ind., and Chilton rounded out the top five in a race where fewer than 10 starters were running at the finish.

Greg Johnson of Bedford, Ind., was running second early in the race when a broken sway bar knocked him out of action; he also led laps along with Chilton and Wells.

Robinson, who was going for his second straight Fall 50 victory, also ran into trouble in the modified main, breaking a lower ball joint on the first lap of that feature.

Notes: Rod Conley’s Rocket Chassis is sponsored by Conley Trucking, Conley River Terminal and Poske’s Performance Parts. … He notched his fourth victory of the season. … In victory lane, Conley said he was “lucky to have a race car left the way some of these idiots were driving.” … Michael Chilton was spun by Wayne Chinn on the 37th lap, but restored to his spot when Chinn was docked for rough driving. … Tanner English finished seventh in the feature. ... Engine problems forced Jesse Lay pitside. … Jason Jameson didn’t compete in the feature after an apparent altercation in the pits involving the teams of Jameson and Robby Hensley after a heat race accident that ended up with Hensley’s car stuffed into the backstretch wall. … Brian Ruhlman won the $5,000 AMS modified feature; that division drew 62 entries. … Florence goes dark for the season; extensive backstretch wall and fence repairs are on tap for the off-season for the track expected to return to action next March for the annual Spring 50.