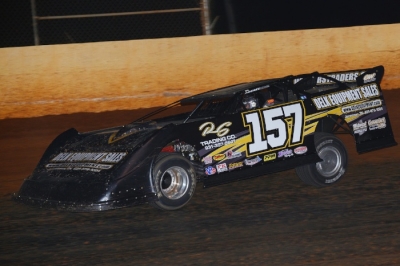 The 35-year-old Marlar got the better of polesitter and hometown driver Tommy Kerr on the first lap, then fought off challenges from Chris Madden of Gray Court, S.C., for his second career victory on the Alabama-based series. | Slideshow | Video

“Whenever I made any crazy moves,” Marlar said, “I made sure to make them on the low side because I could feel Madden breathing down my neck.”

Madden finished second followed by Scott Bloomquist of Mooresburg, Tenn., while Randy Weaver of Crossville, Tenn., and Billy Ogle Jr. of Knoxville, Tenn., rounded out the top five. Jonathan Davenport of Blairsville, Ga., who earned $2,000 for a victory in Friday’s tuneup feature at the 4/10-mile oval, was sixth.

The polesitter Kerr beat Marlar into turn one at the outset of the 50-lapper, but Marlar fought back outside turn two and bolted to the lead down the back straightaway. Shortly afterwards, things would turn sour for Kerr as his car came to a stop on the track with mechanical troubles.

The top four of Marlar, Madden, Chris Ferguson and Bloomquist raced each other hard in catching slower traffic by lap 12, but the frontrunners got clear take on lap 17 with a caution for the stalled car of Skylar Marlar, the winner’s younger brother.

Four laps later, the third-running Ferguson stopped in turn three for another yellow, forcing the Mount Holly, N.C., driver out of the race.

The race ran caution-free the rest of the way with Marlar building comfortable leads with clear racetrack, but facing pressure from Madden in bouts with traffic.

Notes: Marlar drove a Ronnie Delk-owned Rocket Chassis powered by Cornett engine and sponsored by RS Trading and Delk Equipment Sales. … Marlar made a mutual decision with car owner Norman Bryson of Douglasville, Ga., recently to dissolve their Super Late Model team; they’d been together more than two years. … Delk also fields cars for Crossville, Tenn., driver Michael Asberry. … In Marlar’s first start for Delk on Friday night, engine problems forced him out. … Jake Teague of Oliver Springs, Tenn., earned $2,000 for a victory in the Crate Late Model feature, cut to 10 laps because of difficulties in getting the race started; the most serious accident came on the fourth start attempt when James Kelso hit the turn-one wall, collecting the cars of Rusty Webb and Matt Shockley. The fuel cell on Kelso’s car ruptured and fuel spilled onto the track, but no drivers were injurired. … After a three-week break, Southern All Star competitors wrap up the season Nov. 16-17 at Cleveland (Tenn.) Speedway and Cherokee Speedway in Gaffney, S.C.