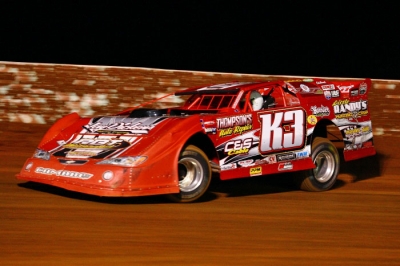 Baggett will start on the front row alongside Don O’Neal of Martinsville, Ind., guest starring in a Louisiana-based Childress Racing entry, in Saturday’s $15,000-to-win main event.

“I believe we’re going to be pretty good,” Baggett said. “(Car owner) Randy Thompson, he’s got that car running good, and the equipment is second to none. Just a few tweaks and I believe we’ll be OK."

Besides Baggett and O’Neal, other Friday heat winners on a chilly evening were David Breazeale of Four Corners, Miss., Jeremy Payne of Springfield, Mo., Chris Smith of Brewton, Ala., and Wendell Wallace of Batesville, Ark. The six drivers will make up for the first three rows of the 24-car feature field.

Shane Clanton of Zebulon, Ga., topped 42 drivers in time trials, but his second-place finish in the first heat puts him in the fourth row Saturday in Whynot’s season-ender.