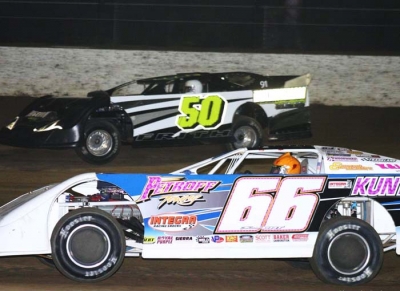 BYRAM, Miss. (May 30) — Starting outside the front row, Terry Phillips of Springfield, Mo., led all the way in the first of two races at Jackson Motor Speedway for his series-leading 62nd career MARS DirtCar victory. Phillips built leads of as big as a straightaway in taking the checkered flag and $2,000 payday. Fourth-starting Bill Frye of Greenbrier, Ark., finished second followed by polesitter Billy Moyer of Batesville, Ark. Seventh-starting Jeremy Payne, a teammate to Phillips, was fourth after running as high as third while Jason Cliburn of Star, Miss., who started third, rounded out the top five. | Slideshow

Phillips edged away by a few lengths in the early laps while the rest of the 22-car field battled behind him. A lap-eight caution bunched the field when Dennis Duncan and David Ashley got together, forcing Duncan to the pits with a flat tire. Phillips led Frye back to green-flag racing and built a comfortable lead while his pursuers battled behind him the rest of the way.

MARS action continues Saturday night with a $6,000-to-win feature event, one of the richest series events of the season.

Notes: Phillips drives a GRT Race Car powered by a Hatfield engine and sponsored by Andy's Frozen Custard. ... A first-turn, first-lap wreck in the consolation race involved several cars, including Ronny Lee Hollingsworth and Anthony Burroughs, both of whom had to go to the tail for the complete restart. ... The events in Jackson are only the fifth and sixth MARS races in the state of Mississippi. The last series visit was to the now-closed Delta Bowl Speedway in Tunica, Miss., in July 2003, a race won by Bill Frye.