By Richard Allen and Robert Walden 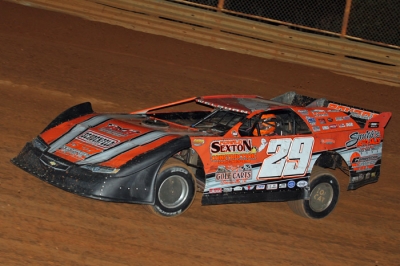 BULLS GAP, Tenn. (Oct. 12) — Jason Welshan of Maryville, Tenn., earned $6,000 Saturday at Volunteer Speedway with a victory in the Clash at the Gap for steel-head engine Late Models.

Welshan moved into the lead amid tight racing midway through the unsanctioned 50-lapper and raced to victory in an event co-promoted by engine builder Vic Hill and track owners Joe and Phyllis Loven. | Slideshow

Trevor Sise of Knoxville, Tenn., was second with Cory Hedgecock of Loudon, Tenn., in third. Mark Martin of Baxter, Tenn., who led the first 25 laps and earned $5,000 at Volunteer in a similar event earlier in the season, was fourth and Josh Collins of Knoxville rounded out the top five.

“I had a really good car and I didn’t think Martin would be able to continue running the pace he was in the early laps,” Welshan said. “I don’t know what tires Martin was running on the rear, but he just took off faster than we did on the beginning. After we started catching cars running at back of the field, I really closed in on Martin’s back bumper and I knew if I just was patient when we got into lapped traffic I would be able to overtake him.”

Martin jumped to the lead at the outset in hopes of repeating his Aug. 16 victory at Volunteer, but Welshan and Sise kept him in check while the eighth-starting Hedgecock worked to the front in the low groove.

On lap 26, Martin was struggling with slower cars when Welshan made a bid for the lead. As the frontrunners races side-by-side into turn they, they touched and appeared to be briefly connected.

Sise took advantage to make a three-wide move on the frontstretch to briefly take command, but Welshan went ahead a lap later while Hedgecock dropped Martin to fourth.

“When we come off (turn) two and raced down the backstretch into the third turn, slower cars were right in front of me and Mark and when I saw him in the high groove, I just drove my car to the inside of him,” Welshan said. “We got together a little battling for the lead, but hey, that’s just good Saturday night short-track racing and putting a show on for the fans. Before me and Mark were able to gather our cars back in, we almost allowed both Trevor (Sise) and Cory (Hedgecock) to get past us.”

After a lap-29 yellow, Welshan built a 10-length margin on the Sise-Hedgecock battle for second. They stayed close enough to be factors late in the race, but Welshan held on for the victory over Sise.

“We came up one spot short at the finish, but man, what a strong run we had,” said the South-Doyle High School graduate. “There when Welshan and Martin got hooked up when battling for the lead, I thought I was maybe going to be able to get past them for the lead. But all in all, our race team, we’re pleased with how we ran.”

Notes: Welshan’s MasterSbilt Race Car is sponsored by Ronald Sexton Construction, Jon's Golf Carts, Smith’s Auto Sales, Roger and Cindy Kerr's Competition Racing Equipment, Hicks & Law Insurers, Jackie Stinnett O'Reilly's Auto Parts, Ronnie King Roofing and Larry Sullivan Sandblasting. ... “I want to thank my car owners Roger and Cindy Kerr and Gary Rolfe for the opportunities they provide me,” Welshan said in victory lane. “I also want to thank my dad, Cotton Welshan, for all his help he gives me working on the car during the week back in the shop and at the track on race night; plus support from my mother Shelia, my daughter Emily, my girlfriend Leanne, Brett Dukes and Ronald Sexton.” ... The top qualifiers were locked into the feature lineup while heats and consolation races set the rest of the field. ... The event wraps up Volunteer’s season.