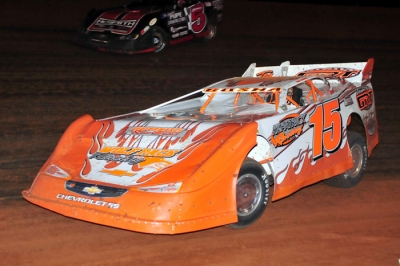 EASTABOGA, Ala. (Oct. 12) — Tim Busha of Boaz, Ala., won a mid-race duel with Hall of Fame driver Ronnie Johnson of Chattanooga, Tenn., at Talladega Short Track to capture the season finale on the Chevrolet Performance Super Late Model Series. | Slideshow

Busha, who led the first 56 laps before his back-and-forth duel with Johnson, collected $6,000 in the Dega 100 while seventh-finishing William Thomas of Phenix City, Ala., wrapped up on the $10,000 championship on the first-year tour designed for CT 525-engine competitors that launched in early August.

Busha regained the lead for good from the high-running Johnson on lap 62 and raced to victory, taking the checkers more than four seconds ahead of runner-up Adam Martin of Talladega, Ala.

“I’ve got a lot of laps around this place, and you have to set your car up to run either the bottom, middle, or the top, and tonight was the first time I could drive any groove I wanted to whenever I wanted to,” Busha said.

Adam Martin was second ahead of his father, Ross Martin of Talladega, while Tennesseans Brad Hall of Knoxville and David Gentry of Murfreesboro rounded out the top five. Johnson slipped to eighth at the finish.

When the first 100-lap Late Model race at the third-mile oval in nearly 20 years took the green flag, Busha took the lead followed by outside front-row starter Ted Lackey of Munford, Ala., Brent Barrett and Johnson. On lap five, Johnson got by Barrett for the third spot. Johnson then chased down Lackey to challenge for second, and took the position on lap 12.

The first of six caution flags appeared on lap 20 when Ohio invader Rusty Schlenk cut down a left-front tire. When the field went green, Adam Martin raced his way through the pack from his 10th starting spot and into the top three.

Dustin Stutts spun to bring out the second caution flag on lap 25. Martin challenged Johnson for second when the green flag came back out, and passed him on lap 26.

Busha, Adam Martin, Johnson, Lackey and Barrett made up the top five for the restart with Johnson turning up the wick, regaining second from Adam Martin on lap 28.

Martin was back into second before the fifth caution on lap-39 for the broken left-front suspension of Stutts, and Busha stayed ahead of the tight Martin-Johnson battle for second.

Lackey dropped out of the fourth on lap 54 and went to the pits just as the lapped car of Mark Tice spun and collected Adam Martin. Tice was ticketed for the caution and Martin got back the second between Busha and Johnson.

Johnson was on a mission on the restart, sailing by Adam Martin for second on lap 55 and then setting his sights on Busha. After leading the first 56 laps of the race, Johnson took the lead on lap 57.

Johnson didn’t have a chance to pull away as the caution flag came out on lap 58 when Josh Adkins spun in turn three and collected Mark Dowdy.

Racing side-by-side, Busha came back to lead lap 60, but Johnson came back on the outside to lead the 61st lap. Busha wasn’t ready to surrender, as he drove under Johnson in turn two to take the lead for good on lap 62, then began to check out on the field. Johnson jumped the cushion in turn two and brushed the wall, and couldn’t stay up front any longer.

With Johnson fading Busha stayed in control the final caution-free 39 laps and won the race that lasted just over an hour.

Notes: Busha’s GRT Race Car is sponsored by Kilpatrick Racing, Performance Race Engines and Wolf Pack Racing. ... Busha won two series events; his previous victory came Sept. 7 at Whynot (Miss.) Motorsports Park. ... Busha was the only top-five finisher to start better than eighth. ... Nine drivers completed 100 laps at Talladega and 17 were running at the finish. ... Thomas ended the series season with 674 points and had four victories in seven series races. ... Busha was second in series points, 46 points back. ... Talladega has a Dirt Late Model doubleheader next weekend in conjunction with NASCAR action across the highway, including a $4,000-to-win Southern All Star-sanctioned event on Oct. 19.