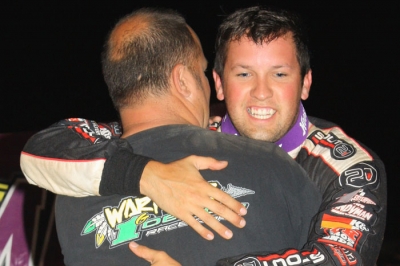 Winner Chris Ferguson gets a hug from his dad. (Gene Murphy)

DUBLIN, N.C. (Oct. 12) — The 2013 season’s poster child for perseverance, fan favorite Chris Ferguson of Mount Holly, N.C., hasn’t had much to brag about in his Super Late program since his Ultimate Super Late Model Series title in 2011. | Slideshow

All that changed Saturday at Dublin Motor Speedway’s Return to the Rattlesnake. Quick out of the box, Ferguson was fastest in hot laps, time trials and the main event, earned $4,000 while leading all 40 laps of the Ultimate-sanctioned event.

“Finally, everything went right for us tonight”, Ferguson said. “We had a great car tonight. We have had a great car all year, but it seemed like something would happen to us every time. It feels good for it to finally turn around.

"The hard work that we have put in this year has really started to pay off during, I would say, the last eight races or so. We have ran top-five, top-three, and competed for some wins. I am just happy to finally get one tonight.”

Trailing Ferguson by a straightaway at the checkered flag was Dennis “Rambo” Franklin, of Gaffney, S.C., while Ultimate points leader Casey Roberts of Toccoa, Ga., was third, giving Ferguson a victory over two of the Southeast’s top dirt racers. Home-state drivers Dustin Mitchell of Pine Level of Shaun Harrell of Fayetteville rounded out the top five.

Franklin was hindered by an ailing carburetor.

“The pump on the back barrels on the carburetor just went bad, I reckon,” said Franklin, who started outside the front row. “It was skipping a little bit in qualifying and we thought the float level was a little high, so we adjusted it. But during the race it just kept pouring gas out of the breather. That’s just racing though. We was lucky to hang onto second.”

At the drop of the green, the polesitting Ferguson jumped out to the lead and never looked back. Not only could he open up at least a 10-length lead on Franklin a lap after each restart, but he could quickly build it to more than a straightaway in clean air.

The only threat for Ferguson came in the form of traffic. On a few occasions, the racing got a little heated as the blistering-fast leader had to negotiate his way around cars who were being piloted by drivers determined on not going down a lap, but Ferguson wasn’t denied.