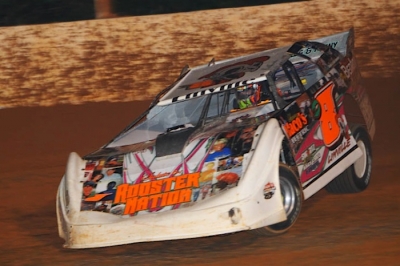 Dustin Linville gets wound up at Ponderosa. (apexonephoto.com)

JUNCTION CITY, Ky. (Oct. 11-12) — Dustin Linville of Bryantsville, Ky., notched the richest victory of his career Saturday at Ponderosa Speedway, earning $5,000 at the 23rd annual Fall Classic. Linville inherited the lead upon leader Brad Neat’s mid-race tangle and led the rest of the way in the 50-lap season finale at the central Kentucky oval. | Slideshow

Neat, of Dunnville, Ky., rallied back to finish second while battling third-place finisher Greg Johnson of Bedford, Ind., exiting turn four on the final lap. David Webb of Nicholasville, Ky., and Victor Lee of Danville, Ky., rounded out the top five finishers at the 3/8-mile oval.

Neat and Linville started on the front row with Neat setting a quick pace early, reaching lapped traffic on the ninth lap before fifth-running Skylar Marlar drew the first caution by slowing on the frontchute. Another quick caution appeared for fourth-running Dustin Neat, Brad’s older brother.

Brad Neat was in control at halfway, working lapped traffic when he made contact trying to put Jeff Watson’s No. 11 a lap down. Watson spun and Neat was tagged with the caution, putting Linville on the point for the restart.

After Shannon Thornsberry hit the turn-four wall and retired on lap 32, third-running Michael Chilton retired to the infield, then fifth-running Justin Rattliff’s car lost power in turn one.

Linville pulled away over the final 10 laps while Neat desperately charged toward the front. Neat took third in lap 47 and while Linville took the checkers, Neat came across the line second with Johnson’s car pushing him after they tangled coming to the finish.