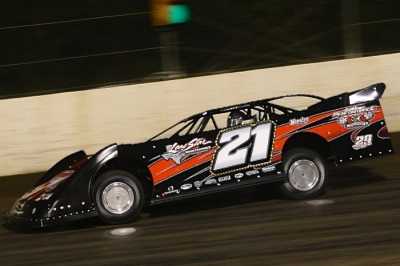 After nearly a decade of open-wheel modified racing, Brown made the jump to Super Late Models for 2010 and 2011 before switching back to modifieds just one week into the 2012 season. The frustration of trying to adapt his driving style to a race car he wasn’t comfortable with was partly to blame for Brown’s move back to modifieds. But he’s finding himself right at home in the new Rocket Chassis he purchased from veteran racer Darrell Lanigan. | Magnolia prelims

“We had the Bloomquist car and just didn’t feel like it was a good mesh for me, so we decided to with a Rocket this time around,” Brown said. “We talked to Lanigan and got a car from him. First night out in it and so far so good. He’s been so helpful. I would’ve never thought it’d been this good so early.”

While Brown did show some promise during his first stint in Late Models, he never reached a comfort level with his race car to allow him to be a consistent contender. And competing almost exclusively in national touring events didn’t make his transition any easier.

But his new Rocket chassis is different. Brown has already found it to be a better fit to his all-out driving style he learned from all his years of modified racing.

“This car right now, I’m so much more comfortable in this car the first night out than I was in the other car,” Brown said. “You see it with other guys who get in a car then get in something else and are a lot better. I think there’s just cars that are a good fit for some people. Jimmy (Owens), Chris (Madden) and several guys run good in (Bloomquist Race Cars), but I just don’t think it was a good mesh for me.

“I drive a little more sideways and I don’t know if I just make too many mistakes for (the Bloomquist car) or what. I feel like I can make mistakes with this car and catch back up and it’s not a huge problem. I guess it’s more forgiving.”

While his return is just beginning, Brown is already looking forward to running more Late Model races. He plans to compete in another Mississippi special event at Whynot (Miss.) Motorsports Park’s Fall Classic Oct. 24-25 and the World of Outlaws World Finals at The Dirt Track at Charlotte in Concord, N.C., Nov. 7-9 before calling it season.

Brown plans to make a full-fledged return to Late Models in 2014, but he’ll likely do it with a different approach than his previous venture into the division. Instead of focusing primarily on major events, Brown hopes to enter more regional events next season while mixing in only a few of the bigger races.

“We’re tossing around some ideas for next year based on how these few races now go for us,” Browns said. “We’ll probably try to run a schedule of the MLRA and MARS deal and some of the bigger races. But either way, we’re gonna race (Late Models) a lot more for sure, and I’m excited about it.”

Before he focuses too much on next year’s plans, Brown still has plenty of work to do this weekend at Magnolia. While he’s simply hoping for a solid finish in Saturday’s 100-lap feature, he believes he’s capable of contending in the unsanctioned event if he can be conservative.

“The hardest thing for me with this car is you can drive it a little more sideways,” Brown said. “But tire wear for 100 laps here is going to be an issue. I’ve got to be careful, but if I can manage my tires and just use my head out there, I think we can be around at the end.”

John Blankenship may have fell short of claiming the Lucas Oil Late Model Dirt Series championship, but the 2013 season will still go down as the best season of his career so far. And it could get even better beginning with Saturday’s Cotton Pickin’ 100 main event.

Blankenship was among the fastest cars during Friday’s heat race action, charging from his third starting spot to overtake Bub McCool and Don O’Neal on his way to winning the fifth of six heat races. He’ll start fourth in Saturday’s feature as he looks to kick off what he hopes is a solid run to the end of the season.

“We’d really like to finish up strong,” said Blankenship, who has three Lucas Oil Series victories this season and won the prestigious World 100 at Eldora Speedway in Rossburg, Ohio in September. “We got in bad run there four or five weeks in a row and kinda put us out of (the points chase). We came back and won the World and it really boosted everybody’s morale. We’re just looking at these last three or four races we have and just trying to do our best and end the year on a positive note.”

With the way his car performed during Friday’s heat race, Blankenship is confident he’ll be among the contenders Saturday night.

“We ran OK here in the Lucas race and that’s the best we’ve ever ran here,” said Blankenship, who finished third in Magnolia’s Clash at the Mag in June. “I think we had room to improve that night, so maybe we’ve picked up a bit.

“I think it’s gonna be picking the right tire. We’ve got a lot more tire choices this weekend and we don’t’ know the track real well. It’ll probably be monkey-see-monkey-do deal. We’ll put on the same tires everyone else is and just hope we have the better car.”

Last year, Jimmy Owens claimed Magnolia’s Cotton Pickin’ 100 as part of an unprecedented streak of five major event victories in five consecutive starts. After setting fast time in his group and dominating his heat race during Friday’s Cotton Picking 100 prelims, Owens is hoping to win the event for a second straight season and set off another late-season hot streak.

“We’ve got the stuff to get it done with, for sure,” said Owens, who has already clinched his third consecutive Lucas Oil Late Model Dirt Series championship. “Hopefully we can get things rolling our way and get on another little streak there to end up our year.”

Like last year, Owens has the luxury of not having to worry about the Lucas Oil Series points as the string of late-season major events gets started.

“Once you get done points racing,” Owens said, “you get that burden off of ya and you can race a lot freer and maybe go for the wins a little harder. It’s just a different level of racing. You can go out there and just have a good time and race.”