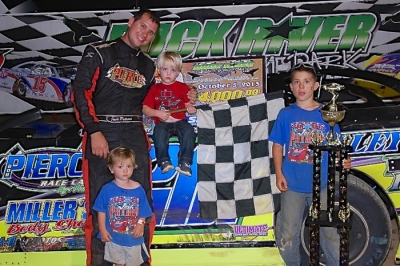 WHEEL, Tenn. (Oct. 5) — Josh Putnam of Killen, Ala., moved another step closer to his second Southern Regional Racing Series championship Saturday night at Duck River Raceway Park with a $4,000 victory in the Tennessee-based tour’s penultimate event of the season.

Putnam, the 2011 series champion, led all 40 laps of Saturday’s feature for his second series victory of the season and the fifth of his career. He was followed at the finish by Michael Chilton of Salvisa, Ky., and Mark Martin of Baxter, Tenn. Brad Skinner of Spring Hill, Tenn., and David Seibers of Petersburg, Tenn., rounded out the race’s top five finishers. | Slideshow

After entering the event with a five-point lead in the $5,000 championship chase, Putnam put some breathing room between himself and second-place Jason Welshan of Maryville, Tenn., who finished 10th after engine woes forced into a backup car. Unofficially, Putnam will carry a 55-point lead into the series finale at Smoky Mountain Speedway in Maryville, Tenn., on Nov. 2.

Notes: Putnam’s Pierce Race Car is sponsored by Valley Metal Fabricators and Miller’s Body Shop. ... Putnam earned his fourth victory of the season paying at least $3,000. ... Sponsorship from Preferred Sandblasting increased the event's winner's pay from $3,000 to $4,000. ... The first of the race’s seven cautions appeared on lap six. ... The second caution waved when Brad Skinner spun in turn four after getting into Chilton. ... A pileup on lap nine collected Welshan and Dane Dacus, among others. ... The final 13 laps ran caution-free. ... Duck River Speedway will be idle until wrapping up the season with the second annual Deep Fried 75 Nov. 15-16. The unsanctioned event pays $10,000 to the winner.