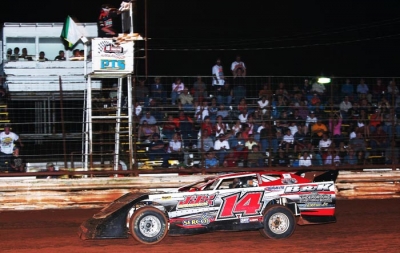 Polesitter Howard Willis of Dayton, Texas, took control from the outset and led the first 25 laps, but Davis, the Greenwood, La., driver who started outside the front row, moved into the lead in search of his second victory of the season. But the ffith-starting Ashley began stalking Davis and made an inside move on the 35th to take command of the 40-lapper. Ashley crossed the finish line ahead of Davis, Willis, another Greenwood driver Ronny Adams, and Ray Moore of Shreveport, La.

Notes: Ashley is sponsored by J&J Motorsports, B&K Underground and Serco. ... The event wasn't without controversy. While titanium valves aren't allowed for cars using the SUPR-approved spec engine package, the series used Memorial Day weekend as an experiment, allowing teams using titanium valves to use them with two restrictions: cars must weigh 2,300 pounds (instead of the usual 2,150) and must include 25 pounds in front of the motor plate. Ashley, who is allowed to use titanium valves on the Mississippi State Championship Challenge, was the only driver with a titanium valve-engine at Champion Park, and several teams complained about the new allowance at the drivers' meeting. Ashley volunteered to run his 8-inch spoiler — instead of the 12-inch spoiler allowed for spec-engine package cars — at Champion Park. Scott Slay ran the following night at Baton Rouge with a similar package to Ashley's, but series director Greg Holmes said SUPR will revert to its customary rules starting May 31 and any team using titanium valves must run under the open-motor package without the taller spoiler and weight break.