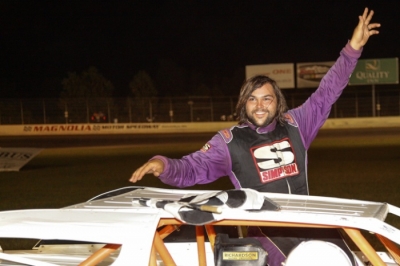 COLUMBUS, Miss. (Sept. 8) — One night after a near-miss, William Thomas of Phenix City, Ala., returned to his winning ways Sunday on the Chevrolet Performance Super Late Model Series at Magnolia Motor Speedway.

The lead changed hands three times before Thomas took command on the 41st of 50 laps and raced to the $3,000 top prize, his third victory in four races on the first-year series for CT 525-engine powered Late Models. | Slideshow

Jeremy Shaw of Millport, Ala., and Ronnie Johnson of Chattanooga, Tenn., kept Thomas clawing and scratching for the race lead, and making choices on restarts. One of those choices almost cost Thomas the race victory.

A lap-36 double-file restart had Johnson in second on the inside and Shaw in third on the outside and behind race leader Thomas, who changed his lane for the restart and went to the bottom of the racetrack. Shaw sailed around the outside to take the lead, but Thomas was able to pick up the pace five laps later to race under Shaw and reclaim the point.

“When Ronnie Johnson restarts behind you on the inside, you’d better get down there and protect yourself,” Thomas said. “I knew Shaw was strong on the outside, but looked to me like that groove wasn’t going to last much longer, and that’s the way it played out. The track was in great shape, as both top and bottom grooves were fast early in the race, but I knew the bottom was where I needed to be at the end of the race.”

Johnson didn’t make it to the finish, as his race car broke a spider gear in the rear-end assembly and he coated to the infield and out of the race on lap 39. Shaw finished second and third went to Matthew Turner of Dawsonville, Ga., who recovered from a lap-20 tangle. Kyle Shaw of Millport, Ala., was fourth and Chase Edge of Lafayette, Ala., rounded out the top five.

Thomas continues to lead the Chevrolet Performance Super Late Model Series point standings with a total of 394 points and a 38-point lead over three drivers who are now tied for the second spot. Johnson, Edge and Turner now all have 356 points.

Notes: Thomas drives a GRT Race Car sponsored by Alexander’s Industrial Service and Austin Trucking. ... Thomas finished third Saturday at Whynot Motorsports Park near Meridian, Miss., after lead-swapping duel with Tim Busha of Boaz, Ala., in the final laps. ... Busha retired after just two laps at Magnolia. ...  Eight of 21 starters completed 50 laps at the 3/8-mile oval. ...Five cautions flags slowed the event that took under 32 minutes to complete. ... Frank Wilson spun on the 20th lap to collect Matthew Turner and David Brannon. ... Track promoter Johnny Stokes was challenging for third near the midpoint when he jumped the cushion, spun and hit the turn-two wall. ... Next up for the Chevrolet Performance Super Late Model Series is a $3,000-to-win event at Clarksville (Tenn.) Speedway.