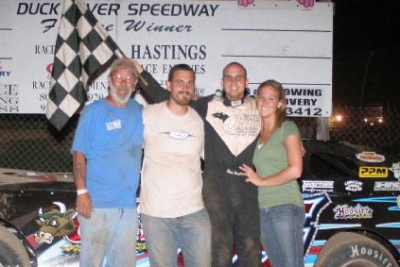 Dacus and his crew celebrate. (www.kimages.us)

WHEEL, Tenn. (May 25) — For 47 laps of the Southern Regional Racing Series-sanctioned Pop Dixon Memorial at Duck River Speedway, Dane Dacus was hardly a factor. But just as it appeared that Randy Weaver would snatch victory away from race-long leader Ray Cook, Dacus made his presence felt in a big way. | Experience benefitting Dacus | Video of last laps

As Cook and Weaver raced toward the checkered flag, Dacus dove low into turn three under Weaver, making it three-wide as they exited turn four. The Lakeland, Tenn., driver slipped by Weaver, making hard contact in the process. Bouncing across the front of Weaver’s car, Dacus climbed the frontstretch wall, crossing under the flagstand with his car on its side in a shower of sparks to claim the victory. The winner’s car came to rest backwards some 50 yards beyond the finish line.

Things didn’t get any better for Weaver. The Crossville, Tenn., native had been pressuring Cook since lap 40, and apparently settled for second, but he was disqualified after failing to report directly to the infield for a postrace inspection. He was relegated to a 25th-place finish.

Cook, of Brasstown, N.C., salvaged a second-place finish, while polesitter Brandon Kinzer was credited with third. Local standout Jay Brinkley of Shelbyville, Tenn., was fourth, with Anthony Burroughs of Athens, Ala., completing the top five.

It took a while to get things rolling in the feature as a string of apparent power outages hampered scorekeepers and slowed action midway through the 50-lapper. The finish however made most forget about the scoring difficulties earlier in the race. And it was a finish few people saw coming.

Cook, who has dominated events at Duck River during his handful of visits there the last few seasons, seemed well on his way to another runaway win after starting from outside row one.

But as the race wore on, Cook couldn’t keep up his torrid pace on the high side. He was challenged early by series regular Tony Morris, but Morris’ charge ended when he nearly looped his ride in turn three on lap 20. Morris kept going, but lost six spots while doing so.

That gave Cook breathing room until Weaver, who started fourth, finally ran him down with 10 to go. Weaver, running the low side of Duck River’s tricky quarter-mile, inched ahead on lap 41. He finally made the pass for the lead with six laps remaining, but Cook battled back.

With the white flag waving, the pair battled side-by-side. Dacus meanwhile took a peak under Weaver in turn three, but couldn’t make the move stick. On the final turn of the final lap however, Dacus left little doubt that he was going for the win. The infield move paid off to the tune of $5,000 and his second series win in his last three starts.

Notes: Kinzer set fast time during group qualifying. Cook, Morris and Weaver were the top qualifiers from their respective groups as well. … Brinkley, Burroughs, David Gentry and Robert Stutts were the heat race winners. … Dacus finished second behind defending series champion Byron Michael at Checkered Flag Speedway in Hohenwald, Tenn., on Friday, May 23. … Dacus became the series’ second repeat winner this season. Cook is the other. … Weaver’s disqualification was the second of its kind this season in SRRS action. Michael won at Moulton (Ala.) Speedway on April 5, but was disqualified after crossing the scales before reporting to the infield. … Gentry, the 2006 series champion and former Duck River Speedway regular, started 11th and was never a threat, nor was defending track champion Daniel Miller, who started 15th and eventually retired with motor problems on lap 29.