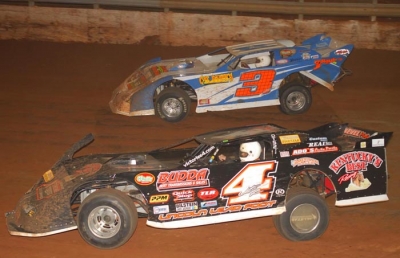 TAZEWELL, Tenn. (May 24) — With a Tyrel Todd-Vic Hill collision knocking the top two cars out of contention at Tazewell Speedway, Victor Lee of Stanford, Ky., was elevated from third to first with eight laps remaining and won his second consecutive O'Reilly Battle of the Bluegrass DirtCar Series victory. The reigning series champion, who gave up the point to change a flat tire after leading the first two laps, earned $5,000 and increased his series points lead in a race slowed by five cautions, none more significant than on lap 52. | Slideshow

Tyrel Todd of Eubanks, Ky., inherited the lead after Lee's flat on the third lap and stayed in control entering the final 10 laps of the 60-lap feature. But Todd and fast qualifier Vic Hill of Morristown, Tenn., who was running second, made contact on lap 52, and Todd's machine spun. Officials put both drivers on the tail, moving Lee to the point for the restart. Lee, who had taken third from Steve Smith of Powell, Tenn., on the 44th lap, led the rest of the way. Smith was second followed by David Webb of Nicholasville, Ky., 18th-starting Justin Rattliff of Campbellsville, Ky., and Chris Combs of Isom, Ky.