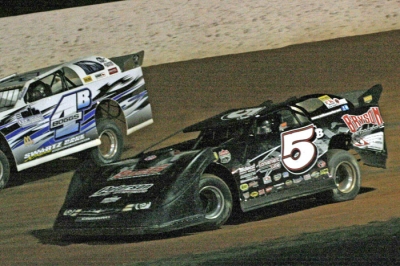 Justin Rattliff of Campbellsville, Ky., advanced from 14th to fourth, while Chris Combs of Isom, Ky., used a final-lap pass to take the fifth spot from Steve Francis of Ashland, Ky. Early leader Jacke Boggs of Grayson, Ky., ended up 18th after retiring from the event on lap 28.

Boggs took the lead at the start of the 60-lap main event and built a comfortable lead before slower traffic came into play on lap nine. Marlar advanced to second by that point with, 11th-starting Dustin Neat third.

Marlar took the lead from Boggs to lead lap 12 before a caution waved when Victor Lee slowed on the front straightaway with smoke coming underneath his car. Boggs retook the lead from Marlar on the restart and held the top spot until Dustin Neat charged by on a lap-23 restart.

Marlar chased Neat after overtaking Boggs, who began to fade and slowed for a lap 28 caution before taking his car to the pit area.

Marlar and Brad Neat chased the leader following the restart with the front-runners catching traffic again on lap 42.

Dustin Neat had the misfortune of making contact with the slower car of Derek Fisher with 12 laps remaining exiting turn two, with Fisher spinning and Neat’s night finished with front end damage.

Marlar inherited the race lead and survive one final restart in leading Brad Neat to the finish.