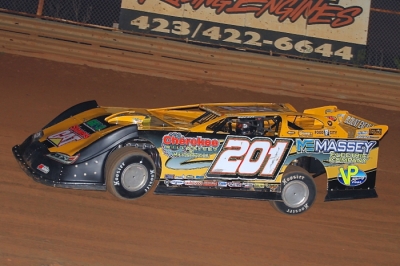 BULLS GAP, Tenn. (Aug. 3) — After a long string of second-place finish and other near misses. Billy Ogle, Jr. entered Saturday night’s Southern All Star Series race at the Volunteer Speedway desperately looking for a victory. The former series champion drove like a man who had one goal in mind in the 50-lap feature.

Advancing from the fifth starting spot, Ogle of Knoxville, Tenn., topped a close side-by-side battle with Vic Hill of Moshiem, Tenn., amid lapped traffic midway through the main event and led the remaining distance to earn $5,000 for his second series victory of the season and his first since early April. | Slideshow

“I needed that win bad,” Ogle said in victory lane. “That was a little too close for comfort. I hope Vic didn’t think I was trying to rough him up. It was just hard racing. Traffic played a role because they weren’t getting out of his way.”

Hill settled for second at the finish ahead of polesitter Stacy Boles of Claxton, Tenn. Chad Ogle of Sevierville, Tenn., was fourth with Steve Casebolt of Martinsville, Ind., rounding out the race’s top five finishers.

Hill pulled ahead from his outside front-row start spot on the race’s initial start, immediately jumping out to an early lead over Boles, as Ogle prepared to make a move forward.

A lap eight caution provided Ogle with just the chance he was looking for. The yellow flag had been brought out when series points leader Riley Hickman of Ooltewah, Tenn., slowed from a top-five spot and retired from the race.

During the first lap back under green flag conditions, several cars were jumbled up within the top-10 as drivers fought for position on the high-speed track. Ogle emerged from that brawl in the fourth spot and set his sights on the front-runners.

But it wasn’t just Ogle who was putting on a show. While Hill commanded the first half of the race, battles raged for position behind him. Chad Ogle, Casebolt and Bryan Hendrix exchanged spots on the track seemingly on a lap-by-lap basis.

Once the race ran for several consecutive green flag laps, traffic began to play a role. Hill’s car seemed to struggle when he had to come off of the track’s top groove to pass slower cars where Ogle’s machine handled well in either lane. After getting around Boles for second on lap 20, Ogle closed quickly on Hill.

The two veteran east Tennessee drivers fought each other as they worked through the back markers. But on lap 31, Ogle seized an opportunity when Hill languished on the bottom line. Ogle threw his car to the outside and a door banging battle ensued over the next three laps. Finally, Ogle emerged with the lead and began to pull away.

A lap-45 caution for the ailing car of Josh Henry was not enough to derail the determined Ogle who again pulled away over the final five laps and went on to claim the $5,000 winner’s paycheck.