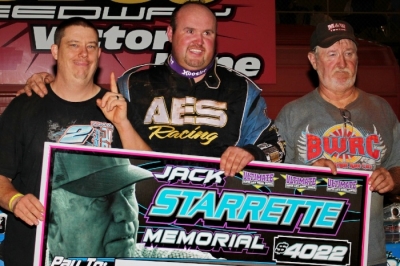 The evening of racing started out under threatening, overcast skies, and then was challenged by rough track conditions. In the end however, nothing was able to derail Franklin’s dominant performance.

“The racetrack was a little rough you know,” said Franklin. “But with all the rain we have been getting that Mother Nature has dealt us lately, the racetrack was the best they could do with it.

“They have an awesome crowd here tonight for this race and it means a lot to me to win it. Mr. Jack Starrette helped more racers than anybody probably knew and he gave a lot to the sport. There are not too many people out there like that.”

At the drop of the green to start the feature, Franklin jumped to the lead over inside front row starter Scott Shirey, of Swansea, S.C. By the fifth lap of the 40 lap feature, Franklin had already stretched his advantage to nearly ten car lengths over Shirey.

The car on the move was Johnny Pursley of Clover, S.C. From the 13th starting spot, Pursley immediately began picking off cars high, low, and through the middle.

Pursley had worked his way to the sixth position by the time the caution was thrown on the 11th lap for the smoking car of Shirey coming to a stop at the top of turn two.

A couple of cautions and restarts later, Pursley was in second and giving full-chase to Franklin. However, although at times closing to within just a couple of car lengths, Pursley’s time in the second-place position would be as far as he would get before a broken torque arm in the closing laps would relegate him to a ninth place finish.

Notes: Franklin’s Steve Cook-owned Barry Wright Race Car is powered by a Clements Racing Engine with sponsorship from AES Racing, M&W Towing, Nichols Plumbing, and Advanced Electronic Services. ... Only eight of the 23 starters were running at the finish. ... The first two Jack Starrette Memorial races were held at Gordon Park Speedway in Grovetown, Ga. John Henderson, of Aiken, S.C. captured an Ultimate Series win in the inaugural event in 2011. In 2012, Johnny Pursley was the victor in a BEAST Series race. … A Starrette Trucking dump truck served as the pace vehicle, leading the field during their four-wide salute to the fans prior to the feature going green. … Jack Starrette will be inducted into the National Dirt Late Model Hall of Fame during festivities on August 10th for his contribution to the sport. ... Modoc hosted the Ultimate Series for the first time since the tour's inaugural event on March 5, 2011. ... The 4/10-mile oval is running a limited scheduled this season after reopening in early June. ... Ultimate competitors are back in action next weekend with an Aug. 2-3 twin bill at Lavonia (Ga.) Speedway and North Georgia Speedway in Chatsworth, Ga. Each program pays $4,000 to the winning driver.