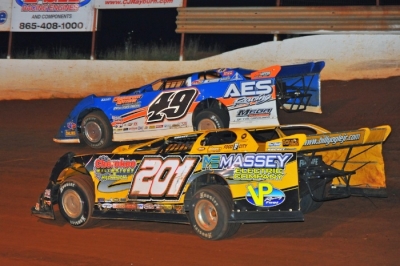 TAZEWELL, Tenn. (July 27) — Jonathan Davenport of Blairsville, Ga., stole all of the spotlight during Saturday’s Schaeffer Oil Southern Nationals Series finale, leading every lap at Tazewell Speedway to claim a $5,300 victory in wrapping up his second championship on the Ray Cook-promoted summer series.

“The last time we won this deal we ended up in victory lane here,” said Davenport, whose first Southern Nationals victory in 2010 came after also winning the finale at Tazewell. “I guess I’m kinda selfish; I don’t like to share victory lanes. This is pretty cool here.” | Video | Slideshow

Davenport dominated the entire night on Tazewell’s high banks, topping time trials, winning the dash and dominating the majority of the feature in claiming his third victory on this year’s 10-race tour, which was cut to seven points races due to rainouts.

“We wanted to come here and make a statement and be the champion,” said Davenport, who earned the eighth Southern Nationals victory of his career. “That’s what we came to do.”

Billy Ogle Jr. of Knoxville, Tenn., finished second to Davenport in the 53-lap main event to also wrap up second in the final series standings race and in the championship standings.

Ogle briefly thought he had a chance to challenge Davenport for the lead after a late caution, but soon had to settled into to second.

“When that caution came out on lap 48 or 46, I thought I had a chance,” Ogle said. “But it seemed like he got his car going again, and I hit a couple holes and messed up and got out of shape. Then I just needed to get to the checkers.”

Vic Hill of Mosheim, Tenn., was third in the race, while four-time series champion Chris Madden of Gray Court, S.C., wrapped up third in the final points standings with a fourth-place finish in the race. Bryan Hendrix of Knoxville, Tenn., rounded out the race’s top five finishers.